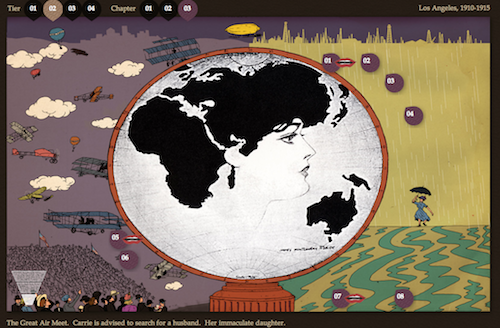 Built with a team of artists and designers, Art Center Humanities & Sciences faculty Norman Klein and Margo Bistis released The Imaginary 20th Century, a ‘wunder-roman’ online narrative engine where fact and fiction split off and return to each other to tell the story in a unique form.

The Imaginary 20th Century is a tale of seduction, as well as espionage; of archiving and the transitive poetics of excavation. According to legend, in 1901 a woman named Carrie selects four men to seduce her, each with a version of the coming century. Inevitably, the future always spills off course. We navigate through the suitors’ worlds, follow Carrie on her travels and discover what she and her lovers forgot to notice. In 1917, Carrie’s uncle sets up a massive archive of her life.  For decades, Uncle Harry had worked for the oligarchs of Los Angeles erasing crimes that might prove embarrassing.  Thus, as he often explains, seduction itself is a form of espionage. In 2004, this archive was unearthed in Los Angeles.

Norman Klein is a media and urban theorist, historian, novelist and artist. The author of the award-winning media novel Bleeding Through: Layers of Los Angeles, 1920-1986 (2003), Klein’s other works include The History of Forgetting: Los Angeles and the Erasure of Memory; 7 Minutes: The Life and Death of the American Animated Cartoon; The Vatican to Vegas: A History of Special Effects; Freud in Coney Island and Other Tales; and the forthcoming book, A History of the Present: The Dismantling of the American Psyche. He teaches at Art Center as well as at California Institute of the Arts.

Margo Bistis is a cultural historian and curator specializing in modern European intellectual and cultural history with an expanded practice in curating and media arts. She writes on modernism, urban culture and caricature, and is the author of the forthcoming book, Fanfare for Bergson’s Ideas: Popular Enlightenment in the Age of Mass Literacy. She teaches at Art Center College of Design.