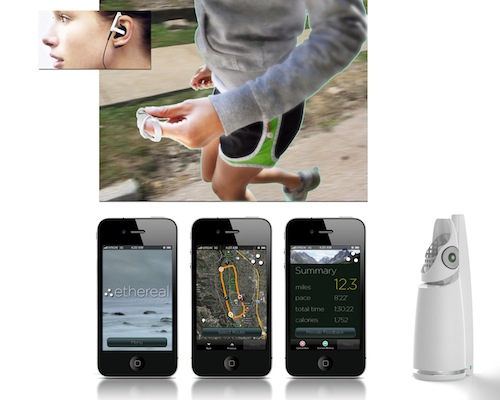 As soon as Kevin Bethune earned his master’s degree in Art Center’s Industrial Design program in 2012, he joined colleagues in establishing a digital innovation boutique to help Fortune 500 clients in health care, retail, consumer products and other industries “figure out how to incubate new ventures within their large corporations,” Bethune said. In early 2014, Bethune and his team relaunched as BCG Digital Ventures inside The Boston Consulting Group.

“If you look at our team,” Bethune said, “we’re in roughly thirds: a third strategy, a third creative and a third technology–very much in the arena of Grad ID. With the client involved as much as possible, we’re collaborating organically in a non-linear fashion so that we can get to a shared vision much faster. We iterate against that vision, making it clearer and crisper, and once we have a good direction of where we should go, we bring design and technology best practices into it, to start to bring those ideas to life in tangible forms.

“Wire frames, prototypes, physical product ideas that can hook into the digital platform–we’re iterating obsessively to make those things better and better,” Bethune said, “to the point where it’s appropriate to weave it all together in a cohesive narrative. The clients can then take those assets and share those communication vehicles within their firms to get more and more buy-in, in terms of the initiatives that they’re trying to push along.”

That process progresses through to physical and digital rapid prototypes of working applications, websites and more, Bethune said. “We’ll dive in to any client situation and try to organically inject a lot of value to help them achieve exponential growth as the result of it.”

Before enrolling in Grad ID, Bethune had traveled an eclectic path. He earned an engineering degree from the University of Notre Dame and worked in the nuclear power generation industry (“we did everything from upgrading reactors and selling new devices and hardware to extending the life of old reactors, that kind of stuff,” he said). He then returned to school, obtained a business degree from Carnegie Mellon and was hired by Nike, Inc. as a strategist and process professional–and shoe designer.

“I always drew for a hobby and that creative itch had always been there,” Bethune said. “Nike attracted me because it had everything: creativity, technology and strategy.” The “shoe design stuff” happened when Nike creative directors saw some of Bethune’s “hobby” work.

The creative itch grew stronger. Bethune sought out mentors at Nike. Learning that many had come out of Art Center, he investigated its Grad ID program and found that it embodied “the perfect intersection” of human-centered design, technology and strategy that would “set me up for the type of things I would want to do moving forward in my career,” he said.

Bethune quit his Nike job and enrolled. “Art Center definitely helped shape me as a professional designer,” he said, “and served as the critical foundation that I needed.”

One “huge takeaway” from the experience, he noted, was the importance of “being mindful to the process of gathering concrete insights from end users and cultivating those insights by getting out in the field and doing some quick and dirty type of explorations, then sharing our thinking and getting feedback.”

Industrial Design Chair Andy Ogden, one of Bethune’s “leading creative mentors,” “would push and pull and challenge the thinking that we may have had on a given project and try to bring that thinking to the next level. When I look at my process as a designer and a design leader in the work that I’m doing,” Bethune said, “I’m especially thankful for Andy’s tutelage.”

Bethune is grateful, too, that every day, “I get to evangelize the power of design and creativity–why multidisciplinary teams make sense, why creativity should be respected on an equal level with your highest caliber strategists or technologists.

“To be able to just represent the function, build a team and then empower younger designers to stand up and create work and share their work with confidence, has been really cool to see,” he added. “And a lot of our clients get the value proposition immediately. It’s a big breath of fresh air to them, and they only want more of it as soon as they start working with us.”