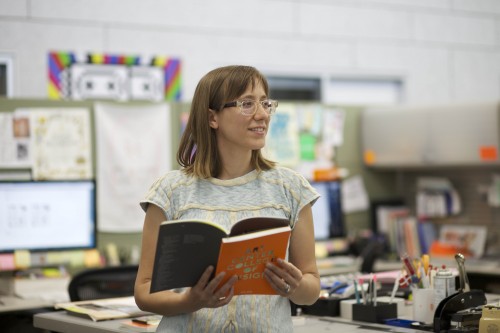 Remember when you were shopping around for college? You were likely deluged with thick catalogs and eye-catching viewbooks sent by institutions vying for your attention. Even in the internet era, the printed viewbook remains a vital tool for communicating a school’s value proposition to prospective students—especially when it comes to art and design schools.

Art Center’s 2015–2016 Viewbook, showcasing student work in 11 undergraduate and six graduate degree programs, was published in September, both in print and online. Content and design for the biennial publication are developed by a core team of Marketing and Communications staff members, in collaboration with Kit Baron, senior vice president, Admissions and Enrollment Management, and the College’s Provost Fred Fehlau.

High-quality visuals are key to the Viewbook, which this year features contributions from photographer Stella Kalinina (BFA 13), commissioned to capture student life on campus and in classrooms. It was a large and complex project, one that Stella was well prepared for as a recent graduate of the College’s Photography and Imaging program, with its emphasis on technical and professional skills along with creative expression.

Stella recalls of her Art Center classes: “Even if the assignments were technically specific—like ‘Ball, Cube, and Cylinder,’ which goes back to the beginning of Art Center’s Photo program—they became more open-ended over time, and you could express your own vision and style.” Standards were high and critiques were constant, challenging students to become more capable and confident image makers.

With the Viewbook, Stella had to meet those high technical standards on her own, without the support of her teachers and classmates. But all those critiques did help prepare her for the rigors of a high-pressure professional assignment. Her training in location work helped too.

“I love shooting on location,” she says. But for the Viewbook, working on a tight schedule, mostly without an assistant, “I had to make the best of each classroom I shot. Some were gorgeous, with great natural light, like the new ones at 870 [S. Raymond Ave.]. Others were not so photogenic.”

One of the most difficult shoots she encountered in the course of the project took place in Entertainment Design—in Room 237 at Hillside, to be exact. “That room is just—,” she pauses, searching for the right word, “madness! The room is filled with materials. There’s so much stuff, and so many students—and that fluorescent overhead lighting!” She throws up her hands in exasperation, reliving the memory.

A further challenge: “Though the instructors Miles Teves and William Basso were very welcoming and accommodating, I did not want to disrupt their class, wanted to be a fly on the wall. But in the Photography program we learn the opposite—staging images to get the best visual result.” 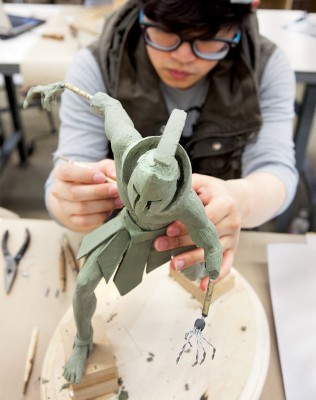 How, under such conditions, to capture an authentic, unstaged image that also tells a compelling story? Her solution was to narrow her focus to individual students and their work. The visually striking result, a portrait of one student deep in concentration, sculpting a character in clay, can be found on page 56 of the undergraduate portion of the Viewbook.

Stella credits all the academic departments—coordinators as well as instructors—for their support throughout the project, helping identify the best classes to shoot and allowing her to interrupt their classes when needed.

Stella has begun licensing her work through a new boutique agency called SheStockImages, whose mission is to provide insightful and inspired images of women’s lives, created exclusively by professional women photographers. She met the site’s founder and creative director Karen Beard (BFA 97) last fall, during Grad Show Preview, the end-of-every-term event that attracts hundreds of industry representatives to campus to discover and recruit fresh talent for their companies, agencies, galleries and other enterprises.

“So much stock photography shows women in secondary roles,” says Stella. “But through subtle choices we make as photographers, we can create much more realistic images of women.”

“You describe your goals, you can even ask for specific names,” Stella says of The Dot Exchange application process. Whether established in their careers or still working their way up, she says, alumni are eager to work with students and fellow graduates because “the Art Center connection really signals a shared experience, drive, professional standards. There’s a trust and a confidence.”

An East Coast transplant, Stella plans to stay in Southern California due in large part to the robust professional network of alumni here. “I couldn’t imagine coming to L.A. and not having that network,” she says appreciatively.

“Because I want to do film, I’m in a new learning phase,” she continues. “Working with Melodie I’m learning how large productions work, who does what on big teams. In photography you do everything yourself. But as a director, you can focus on making all these decisions that sum up your vision. By giving up all those other functions [camera, lighting, sound, set design, wardrobe, etc.] you can actually pay more attention to all the little details that will express your vision. It opens up a lot of possibilities.”

Stella aims to apply her new insights and skills to startups and smaller brands, and recently joined her friend and fellow alumna Cora Neil (BS 13), and Cora’s husband Matt Smith, in launching their new product, Hedge, a colorful line of contemporary planters made in the U.S. Each design—Gertrude, Beatrix, etc.—is named after a pioneer woman of landscape and garden design.

“I always wanted to collaborate with a designer,” says Stella. “And I loved being at the creative center of this project [with Cora and Matt], doing some of the creative direction, not just executing a concept that already exists. What I want to do is build a career that involves working in these kinds of teams rather than as a lone wolf.”

The Hedge collaboration also tapped Stella’s growing interest in filmmaking. Her artful, evocative video about the making of the planters supported the product rollout on Kickstarter, helping the project attract five times the funding it set out to.

“Photography is a great foundation for moving images,” she notes. During her final year in school, Stella took film-related electives in both the Film and Fine Art departments. “I wanted to try it out,” she says, “and I ended up falling in love with it.”

The Viewbook’s overall message is one that Stella herself can personally attest to. “I had a wonderful experience here. Art Center really does create opportunities and change lives. It sounds cheesy,” she admits, “but it really does make dreams come true.”