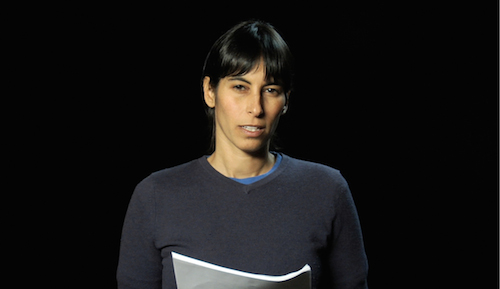 Complex questions about our relationship and responsibility to the physical world we inhabit lie at the heart of Amy Balkin’s creative process and the work itself. Balkin, who studied with Fine Art Chair, Vanalyne Green while attending Art Institute of Chicago, recently visited Art Center to speak about the ideas that inform her creative practice, which explores issues of environmental justice, legal borders and the geopolitics surrounding the land we inhabit and the air we breathe.

Her major projects include This is the Public Domain, an ongoing bid to create a public commons from a piece of land she purchased in Central California; Public Smog, a clean air park she opens periodically by purchasing carbon emissions; and A People’s Archive of Sinking and Melting, a collection of items from places under threat of disappearance due to political, physical and economic shifts.

Just prior to her talk at Art Center, Balkin sat down with Dotted Line to discuss her approach to these ambitious works. 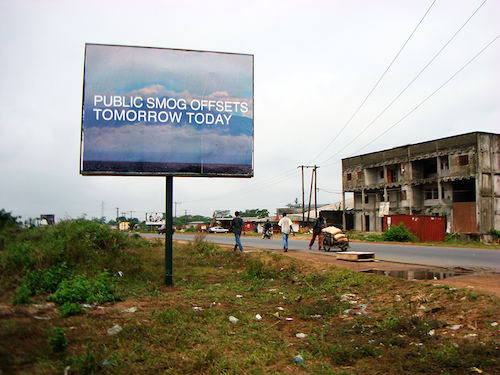 Art Center: How did your interest in environmental justice come to animate your work?

Amy Balkin: The work I’m doing is often informed by my own experience. But it’s also a response to how I understand the politics of the landscape in terms of the pressing conditions that people are suffering under and are often occluded or difficult to see. For me, it’s that sense of injustice that animates what’s important to me.

Art Center: Is it important to you to ensure that your work is accessible to the people most impacted by the ideas you’re expressing and conditions you’re reflecting?

Amy Balkin: That’s a complicated question. For example, the work I’m trying to do now, is called, A People’s Archive of Sinking and Melting. It’s a collection of things from places that may no longer be able to physically support them in the future, based on the impacts of climate change. For this project, I’m asking people to participate. So there are a lot of questions about audience participation; such as how the call for participation is distributed, who gets reached, and who is actually able to submit.

I have a fine arts background. I don’t have a background in journalism or science or any of these fields that I try to learn about as I’m going along. So there are questions of not losing complexity, respecting the audience and respecting people who may participate in the work enough to say, ‘I’m not going to oversimplify something that’s fraught more than necessary.’

Art Center: Can you draw a connection between what you’re working on now and your previous work?

Amy Balkin: I went to art school at the School of the Art Institute of Chicago; Vanalyne Green was actually my first video art teacher. This is the first time I’ve ever been invited by a former teacher to give a talk. I’m really grateful because it was her video class that first exposed me to some of the critical kinds of thinking and projects that inform my thinking now. For example, Vanalyne introduced me to the work of Paper Tiger TV. At the time I was trying to do interdisciplinary work – video, sculpture and painting – in the early 1990’s. I was doing that and trying to develop some sort of critical position when I moved to San Francisco from Chicago. I began to travel around California, and came across projects like the Center for Land Use Interpretation, and I began to recognize a wide range of critical ways of engaging with politics and landscape. In 2001 I went back to graduate school at Stanford, and then began work on This is the Public Domain, an ongoing effort to create an international commons from a piece of property I purchased near Tehachapi, through a handover to the global public.

Art Center: What’s involved in that?

Amy Balkin: Finding a strategy to make a public handover; the project still seeks an appropriate mechanism. But there’s not legal space for that. And so that’s the state of the project: the land is still sitting there. The land was cheap because it was in the middle of a wind farm. But now the wind farm is being built out. And it’s also in the middle of the right-of-way for the California High Speed Rail. So there may be potentially a strategy for a public handover through those complications. But that begs the further question of boarderization, migration and how you have a public commons within the confines of a State.

Art Center: How did that experience inform what you’re doing now?

Amy Balkin: After I began working on This is the Public Domain, Bradley Angel, a leader in the environmental health and justice movement, came to speak in a class I was taking at Stanford and I heard about the environmental justice activism he’d been doing in communities around California, especially around the siting of toxic hazards like waste incinerators, in poor, non-white communities. I wanted to support what he was doing. So I proposed collaboration for an environmental justice audio tour of the I-5 freeway between San Francisco and Los Angeles, bringing together Bradley Angel’s organization Greenaction, members of impacted communities who fought these toxic sites, artist Kim Stringfellow, and urbanist- audio producer Tim Halbur. The project used the I-5 and it’s infrastructure as an armature to site the stories set along it.

After that two-year project, I began Public Smog, an ongoing effort to open an atmospheric ‘clean air’ park, in the context of climate change and the beginnings of emissions trading markets, which I understood as a new commodification of the atmosphere. The park has opened three times in the past, each time through the completion of a tactic to intervene in the atmosphere. The first action happened in 2004. With the help of an emissions trader, I purchased the ‘right’ to emit 24 pounds of ozone-influencing gases in the South Coast Air Quality Management District, and withheld them from use. That purchase and withholding created a very small clean space over Los Angeles, where the park was open for two weeks until those credits expired. I opened Public Smog again over the European Union from 2006- 2007. That came about through getting permitted to do emissions trading in the European Union and then making emissions trades on regulated European markets for the ‘right’ to emit carbon dioxide.

Since then, I’ve been working on an effort to have Earth’s Atmosphere inscribed on the UNESCO World Heritage List, which I began in 2006 but developed further with support for the exhibition dOCUMENTA. As dOCUMENTA takes place in Germany, the first step was to see if Germany would act as a State Party to lead a nomination process, which is required. When there was a reply of ‘no’ in 2010, there was a decision to open it up to all UNESCO States Parties. Working with dOCUMENTA, a letter was sent to all UNESCO states that a State Party was sought to lead a coalition effort to list Earth’s Atmosphere, as the atmosphere is not a property (as defined by UNESCO0 within a national boundary. There were very few replies to repeated invitations. One of those responses came from the Kingdom of Tonga. And there was the desire but not the administrative budget or political capacity. It was exciting and provocative that there was interest. After that, the audience was asked to directly and individually petition their nations from within the exhibition through a postcard petition. 100,000 people participated, but Germany, which received the bulk of the postcards, again declined, and no State Party came forward elsewhere. So right now the park is closed. But it will open again. At the right moment, which should be now. Permanently.

As the climate changes unevenly and with dire impacts, people are responding in timely ways that have a sense of the stakes. What kind of relationship does cultural production have to these stakes? It’s a question that will continue to influence my thinking and shape of how I’m working.

One thought on “The creativity of environmental and social accountability: Q&A with artist Amy Balkin”