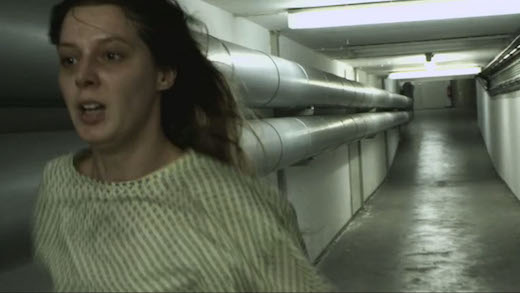 Still from Matthew Ward’s Damned, the story of a woman who escapes a research facility and discovers the city around her devastated by a virus.

Out of the comfort zone

When Lizbeth Chappell visited the graduate Film Department as a prospective student, she liked what she heard: the program caters to the individual; students own the rights to their work; and the faculty focuses on preparing its graduates to work professionally.

When Chappell toured Art Center, she also liked what she saw: the high quality of the work in the student gallery indicated she would be surrounded by talented individuals. As it turned out, working with students from other majors would prove to be one of the most rewarding aspects of her Art Center career.

One such collaboration with Advertising student Jamie Yuen (BFA 12), a speculative Teen Midol commercial Chappell directed called “Uncomfortable Situations,” proved particularly fruitful. In the commercial, a high school football team’s female mascot unwittingly finds herself in the male players’ locker room and, once discovered, improvises her way out of the situation.

For the concept, Chappell and Yuen first boiled Teen Midol down to a product that relieves uncomfortable situations. From there, their goal was to create something bold and memorable. In other words: it was the antithesis of a typical feminine product commercial.

The Academy of Television Arts & Sciences agreed with their approach, awarding “Uncomfortable Situations” second place in the Commercials category at the 2013 College Emmy Awards.

As for Chappell’s professional prospects? While still a student, she co-produced A Better You, an independent feature directed by Upright Citizens Brigade co-founder Matt Walsh, and was signed to produce three other features upon graduation.

Born in Taiwan, Mego Lin came to Art Center holding a degree in fine art with an emphasis in still photography. But some multimedia experimentation sparked within her a curiosity about filmmaking, so she decided to visit the College’s campus.

After meeting with the graduate Film Department chair, she came away believing her ability to capture moments of people’s lives through imagery would translate nicely to cinematography.

Lin cites The Director and the Script as one of the most important courses she took at Art Center. As part of the two-term class taught by television director and DGA executive board member Victoria Hochberg, each student wrote a short film and then directed an on-campus shoot that needed to be completed within six hours. Students took turns directing and performing every other on-set job, an experience that gave Lin a strong understanding of the entire filmmaking process.

Beyond providing her with ample opportunities to hone her experience behind the camera, that course also proved important for Lin because it’s where she met her classmate Jon Jon Augustavo. The following year, Augustavo asked Lin if she’d like to accompany him to Seattle during a break between terms to shoot a few music videos.

One of those videos? Macklemore & Ryan Lewis’ Same Love, a song which transcended pop music and became a rallying call for gender equality, garnering more than 128 million views on YouTube to date and winning MTV Video Music Awards’ 2013 Best Video With a Social Message.

After earning an undergraduate degree at a large local state university and spending several years working in various fields, Matthew Ward decided to finally pursue his lifelong dream of writing and directing films. But, he told himself, if he was to return to school for his master’s, he needed: an intimate academic experience; an environment that taught all aspects of filmmaking; and, most importantly, a setting where he would get serious work done.

Ward entered the graduate Film program not only focused but determined to have experiences he missed out on as an undergraduate. Chief among those? Studying abroad, which he quickly amended by traveling to Berlin as part of a Transdisciplinary Studio hosted by the Illustration Department, in which he spent 10 weeks recording ambient sounds and conducting interviews with locals—all resulting in an audio installation back at Art Center that captured his impressions of the German capital.

Ward returned to Berlin months later to shoot his portfolio project, Damned. Written and directed by Ward, Damned tells the story of a woman who escapes a research facility only to discover the city around her has been devastated by a virus. To make the short film happen, Ward connected with a German actor he had met previously and also hired a local crew.

The most memorable moment of the shoot? The final day of filming was interrupted by a power outage and the evacuation of a nearby medical research facility due to a real-life contamination fear.

To learn more about Art Center’s graduate and undergraduate programs, check out the new 2015-16 Viewbook.

2 thoughts on “From Teen Midol to Macklemore: Storytelling by Graduate Film students takes many forms”