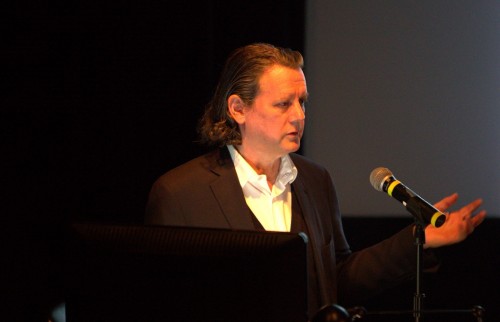 In the Grad Art Seminar series, Jeff Wall spoke candidly about his work and its influences. (Art Center photo by Juan Posada)

Vancouver-born and -based artist Jeff Wall is now living and working part-time in Los Angeles, which is good news for students at Art Center. A capacity crowd filled the L.A. Times Media Center at Hillside Campus last Tuesday night, eager to hear what he had to say.

Jack Bankowsky, who co-curates the popular Grad Art Seminar series with fellow faculty member Walead Beshty, introduced Wall, and reminded the audience of three of his works—opaque black and white prints—that are set in Los Angeles: Citizen (1996), a man lying on the lawn in a public park; 8056 Beverly Blvd., Los Angeles (1996), a cinema-turned-synagogue, framed in a circular black vignette; and Office Hallway, Spring Street, Los Angeles (1997), a man in a dimly lit, nondescript hallway.

Wall says he first began coming to Los Angeles because of the special effects houses here. Indeed his passion for cinema, first ignited in the late 1950s, has been a driving force throughout his long career, and he coined the term “cinematographic” to describe his work as “a kind of photography that has come into relation with the cinema without being it.”

Since the 1990s, Wall has become best known for his large-scale, single-image, color panoramic transparencies mounted in light boxes, a presentation strategy that gives each piece a heft and allure at once sculptural and cinematic. His meticulously crafted scenes have the look of reportage but are decidedly constructed, or what he calls “near-documentary.” They draw on the history of painting, and the tradition of the life-sized tableau in particular; and on the work of neorealist filmmakers such as Fellini, Rossellini and Visconti. The artist was the subject of a major retrospective in 2007, organized by MoMA, SFMOMA and the Art Institute of Chicago.

And in today’s internet era, when a 13-foot panorama gets compressed to a couple of inches, Wall, who has recently returned to making only opaque prints, is adamant: “You cannot see the work unless you’re standing in front of it.”

Wall will turn 70 next year and in his Art Center talk—candid, philosophical, eloquent—he discussed his artistic influences and also addressed some common misconceptions about his work.

On encountering, as a young artist, Walker Evans’ iconic 1938 book American Photographs:  The first thing I was confronted with was the perfection of the classic documentary photograph. [Evans] did everything you could do with a book of photographs. The photography of the ’70s was a period of challenging what Evans had perfected. The photo book was complete. There was no way one could think about following in that direction. Where would one go with this ambition?

On silence: I don’t like to comment on my pictures. What I like about the Evans book is the blank page—the artist is not going to tell you what to think. There’s a silence in that. The picture has all its explanations wrapped up in itself.

On why he does not photograph things as they happen: Cartier-Bresson was the hunter—to seize the moment. I’m not a hunter. It’s the vanishing of the moment, the loss of the real moment, that creates that space [for art]. Something interesting, indefinable, soothing, enjoyable happens to me when the thing escapes. 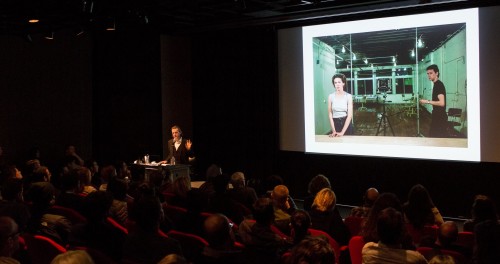 Jeff Wall addressed a full house in L.A. Times Media Center. On the screen, one of his signature pieces, Picture for Women (1979). (Art Center photo by Juan Posada)

On the influence of cinema: I was a young cineastic person at a moment when there was a real flowering of cinema, in the ’50s. It was a good period to be a filmgoer. The cinema is not a pictorial art. The cinema itself can’t make a picture. It’s an illusion—we’re looking at a cinematic projection…a highly refined, attenuated form of realism. Filmmaking, cinematography, seemed more open, more filled with photographic possibilities. There were many methods one could undertake. The idea of artifice became very important. Artifice was not really accepted [in the ‘70s], it was considered commercial.

On the power of tableau paintings such as Velázquez’ Las Meninas:  It resembles the world in which the viewer is standing—it’s almost like the world confronting itself, or you [the viewer] confronting another entity, another being. The picture would gather people and they would form new associations. That’s the utopian notion of the tableau. Insofar as photography wants to be a tableau, it must come into relationship with photography.

On blending artifice and actuality: There’s a literary element in any pictorial subject. I don’t use the term staged photography for my work because there is no stage. I am trying to blend direct reportage with literary elements. It’s the same thing [Italian neorealist] filmmakers did, mixing actors with actual neighbors and bystanders. It’s about the contemplation of reportage, not a replication of reality.

On why he has no desire to make films: I don’t think I’d be very good at it. I’m not interested in narrative. I don’t think pictorial art is narrative. It depicts an instance in a narrative but it only goes where you take it. It defeats narrative, in a way. It holds narrative in suspension. You have an aesthetic experience, kind of an old-fashioned term. What I think happens in a picture is that the viewer enjoying the experience…writes the story. I believe everyone does write it.

The Graduate Art Seminar lecture series at Art Center College of Design is a forum for graduate students, members of the Art Center community and the general public to enter into dialog with internationally recognized artists, critics, and art historians. The Seminar—a core component of Art Center’s Graduate Art program—takes place Tuesday evenings throughout the Fall and Spring terms. Admission is free.