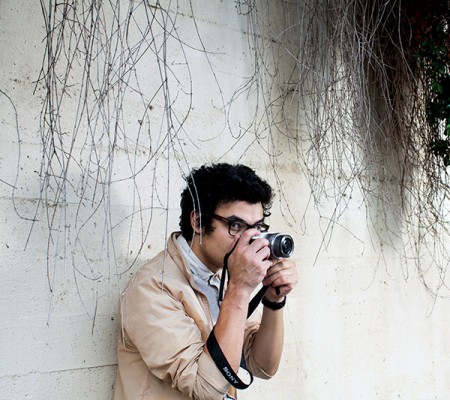 In late 2012, Film alumnus Saman Kesh (BFA 10) went to Taiwan on an assignment to write and direct a short to promote a forthcoming massively multiplayer game in the vein of World of Warcraft.

What Kesh ended up making over the duration of a two-day shoot was Controller, an eight-minute science fiction short film about an imprisoned young woman with psychic powers who takes physical control of her boyfriend to facilitate her rescue.

What does the former have to do with the latter? Other than two Chinese hanzi characters that appear at the 7:45 mark—since the game was developed for the Chinese market—absolutely nothing.

“What the company asked for was essentially a science fiction project that had no connection to the game,” Kesh says, describing the assignment. “It’s funny, because I tried to place hints of the actual game into the film, but they kept telling me, ‘Take it out, take it out.’”

That ended up working to his advantage when, in the middle of editing, for reasons still unknown to Kesh, the company put the brakes on the project.

“They were no longer interested,” says Kesh who, along with Marco Wu and Tom Lee, the film’s contracted producers, set out to gain the rights to the intellectual property they had created for the short. “I had fallen in love with the story and wanted to continue further with my vision, but on my own.”

Hollywood loved what it saw, too, and several studios began bidding for the project. Ultimately, Kesh signed a deal with 20th Century Fox in which he would direct a full-length feature that would flesh out Controller’s narrative.

Kesh says he chose Fox primarily because the studio embraced the film’s setting of a futuristic homogenized Taiwan. “The project feels like anime,” Kesh says. “It wouldn’t work if it was set in America.”

Kesh had no idea things would work out this way. Before Controller took off, he had already mentally mapped out his first feature film—a low-budget return to the world he created for his 2009 “Luv Delux” music video for Cinnamon Chasers.

“Very rarely is a newb allowed to bring a concept into a studio space,” he says. “It’s been eye-opening and now it’s a model I can follow in the future.”