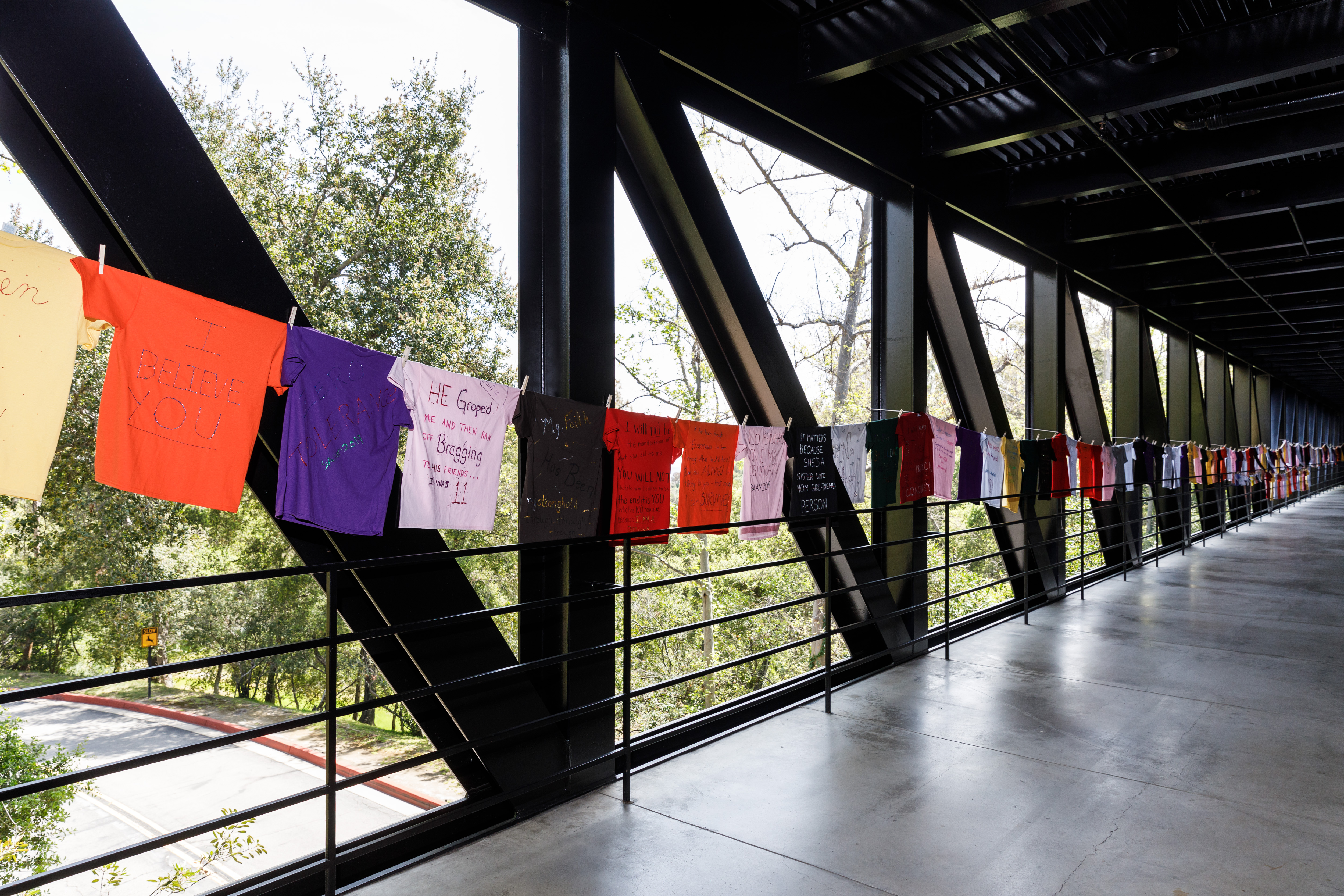 The College is recognizing Sexual Assault Awareness Month (SAAM) by presenting a series of events and workshops to educate the community, raise awareness and reduce incidences of sexual violence on campus. One of several ArtCenter initiatives during the month is the Clothesline Project, a powerful visual display of t-shirts with graphic messages and illustrations designed by survivors of sexual violence as a way to express themselves and serve as a testimony to their experience. An exhibition of the clothesline is free and open to the public from March 26 through April 12 on the Bridge at Hillside and from April 15 through April 30 at the front entrance to the 950 building.

“We’ve had an incredible response from the ArtCenter community to our first-ever Clothesline Project,” said Sadara DeVonne, Department of Human Resources administrator and Title IX coordinator, who is leading the campuswide programs in support of SAAM. “I’m very pleased to see so many individuals participating in this important exercise to increase awareness, celebrate the strength to survive, promote healing and provide an avenue for survivors to break the silence that often surrounds their experiences.”

The entire community has joined the effort because participation is not limited to survivors of sexual assault. Many individuals have created shirts bearing a message of support, encouragement or tribute to others, such as “You Are Not Alone,” “We Support Survivors,” “There Is Hope,” “Not On My Campus,” or “Not In My Workplace.”

DeVonne acknowledges that the Clothesline Project can be a powerful and emotional experience requiring sensitivity from all members of ArtCenter’s community. She emphasizes that support is available on and off campus to students, faculty and staff in need of resources.

The Clothesline Project is a global phenomenon to remind people of the real meaning of violence statistics that are often ignored. It originated in Hyannis, Massachusetts in 1990 when a member of the Cape Cod’s Women’s Defense Agenda learned that during the same time 58,000 soldiers were killed in the Vietnam War, 51,000 U.S. women were killed by the men who claimed to love them.

As ArtCenter promotes these programs to educate and increase awareness about sexual violence and prevention throughout our campus community during SAAM, DeVonne said it is important to remember the College offers support to anyone who might need it throughout the year. Community members are encouraged to read Common Myths and Facts about Sexual Violence for more information.