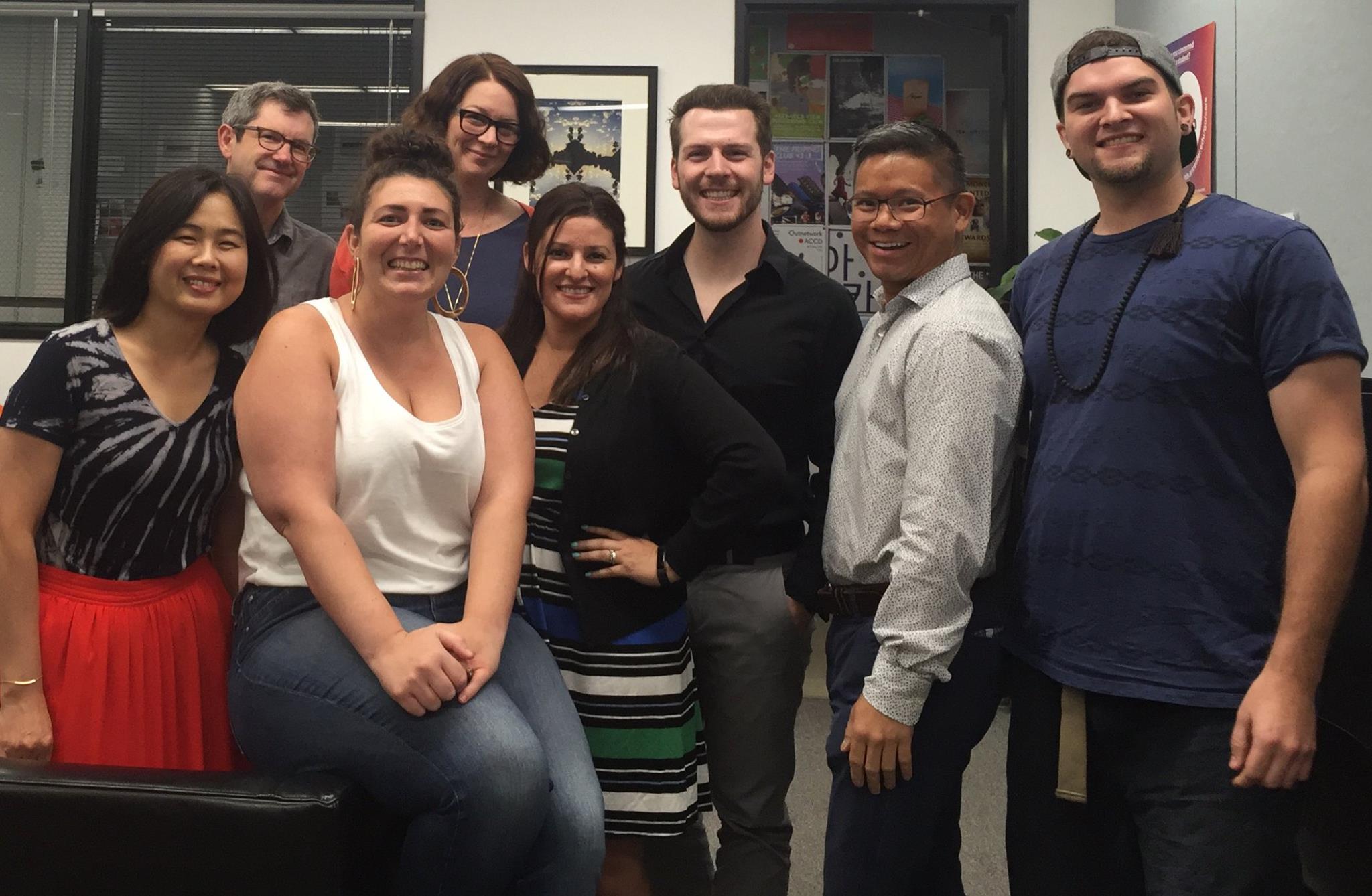 Graduation is a time for all of us to celebrate, congratulate and applaud our students as they set out to make the world a better place, armed with a degree from ArtCenter. It is always a little bittersweet, however, as we once again have to say goodbye to our graduating students. Three times a year it feels like we are we standing on the shore waving as they sail off seeking adventure and opportunity.

For offices and departments that regularly employ student workers, graduation also often means the departure of a valued colleague.

This term, the Center for the Student Experience (CSE), Career and Professional Development and Admissions are losing a much-relied on and much-loved staffer, Illustration major Alec Bickelhaupt. Alec started working as an Orientation Leader his second term at ArtCenter. By the time he graduates next week he will have served 16 terms in this role, as well as serving as of the CSE’s student workers for the past 10 terms. Additionally, he has worked Career and Professional Development’s Recruitment Open House event approximately seven times and served as a Tour Guide for Admissions for three terms.

We checked in with CSE’s Celeste Guarneri to find out a little more about Alec and how their office is going to manage without him.

Campus News: What is your role at the College and how do you interact with student workers?

Celeste Guarneri: I help to connect students to resources, each other, and the Los Angeles area through Orientation, campus events, off-campus trips, co-curricular programs, clubs and ACSG. I also help to coordinate the SLED Grants and #workingit Student Success Series. Through these roles it has been my pleasure to work with over 100 student workers each year! I help to train them, get them acclimated to the role they have been hired to, and assign day-of and long-term design projects and tasks.

CN: Is it common for a student to become an Orientation Leader in just their second term?

CG: Over the last couple of years we have seen a rise in applications from 1st term students, interested in an Orientation leader position in their second semester at ArtCenter. But, I attribute that to the Student Leaders doing such a great job during Orientation week, that they’ve inspired their peers to take interest in the position.

Alec was a rarity in his time. My first ArtCenter Orientation in this role, was Alec’s Orientation (Summer 2014). Right from the start, Alec was attentive, polite, helpful and detail oriented. We connected immediately, and I knew I needed a student with his spirit and drive to help me be successful in this new environment. Over the years, we have worked together very closely in many capacities, but his role in Orientation will be hard to replace.

CN: You were overheard saying you didn’t know how you were going to get through Orientation without Alec—how have his contributions differed from other student workers that have come through your office?

CG: Alec has a keen eye for solutions, before problems sometimes even present themselves. He can put himself in my shoes, in the shoes of a new student and in the shoes of the Leaders, which puts me at an unparalleled advantage when it comes to planning and hosting nearly 900 new students each year. He is a hard worker and never leaves a teammate, including me, unsupported. It has been rare in my 15+ years in student affairs, to find a student that cares as much about the community as we do. Alec has proven time and time again that he can take direction, problem solve and lead with kindness.

To be honest, we have been very lucky in the CSE, in terms of our student employees. This is no “fluff job”… Due to the nature and pace of our office in this community, we need student workers who go above and beyond, can be trusted with sensitive information and who know a little about a lot of things.  To toot Alec’s horn just a bit more though, he has been the only one in my memory to ever dive into the international student process in such depth. He recognized that he could help students beyond what was expected of him and he learned processes that allowed him to be and advocate and aid to all international students through the CSE.

CN: How did Alec come to spend so much time as a student worker?

CG: It happened relatively organically. When Alec first started at ArtCenter, we were still mostly under “one roof” for undergraduate students. I would see him around campus, and he would make a point of stopping by the CSE to check-in. I hired him as an Orientation Leader for the start of the Spring 2014 term and we never lost sight of each other. His friends worked with me in ACSG and in the CSE, so it was seamless as he began to take on other roles within our office. Flash-forward nearly 5 years, and he has “brought in” students who now work for us, use our services, and lucky for us, just stop by to say hello. He leads by example, through and through.

The lovefest goes both ways. Alec recently reflected, “This essay was supposed to be about how I contributed to the ArtCenter community but it made me realize how central ArtCenter is to my life. I’ve found a future fiancé, life-long friends, supportive mentors and most importantly, my voice.”