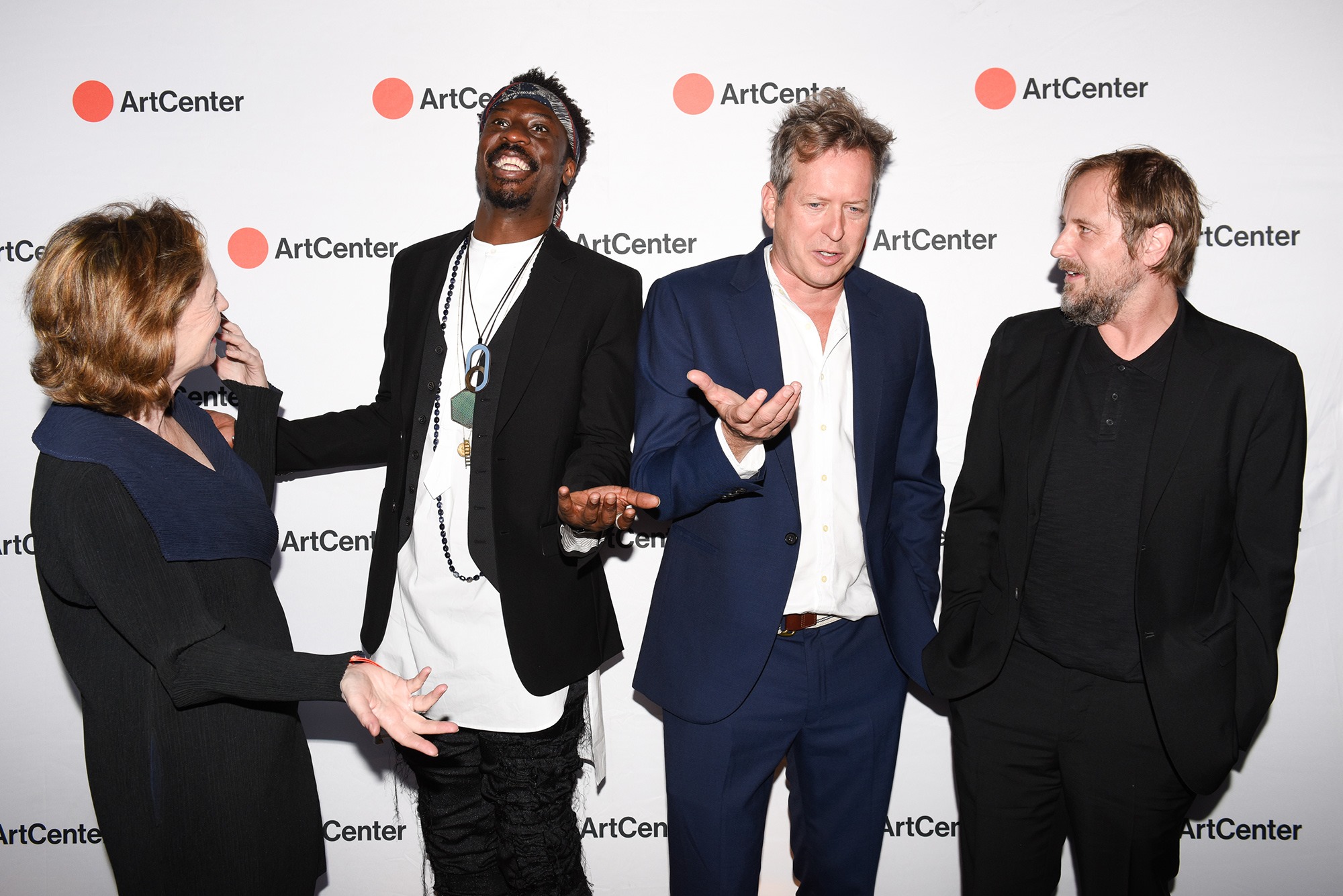 ArtCenter College of Design celebrated its 2019 Alumni Awards on Saturday, November 16 in Downtown Los Angeles, bringing together prominent members of the Southern Californian and international art and design communities to recognize awardees Doug Aitken (BFA 91), Ini Archibong (BS 12), Gloria Kondrup (MFA 93) and Sterling Ruby (MFA 15). Beginning the evening at Oculus Hall at The Broad, guests were welcomed by ArtCenter President Lorne M. Buchman, who spoke of the unique event and how it touched on a variety of visionary leaders bringing connection between the fields of art and design.

Relating the idea of teaching courage as part of the core curriculum, President Buchman recognized the 2019 awardees for their contributions, and for their bold and challenging work. “On a personal note, I’m feeling incredibly inspired by our award recipients,” said Buchman. “You honor us with your creativity and passion, your thoughtfulness and success.”

While accepting the 2019 Young Innovator Award, the prolific designer Ini Archibong spoke of his experiences as an ArtCenter undergraduate student. “Really the first time that I focused on anything, and I had my first real achievements, was going through ArtCenter,” he said. “The first piece of furniture that I did started a trajectory for me of good things in my life, and I’ll always be appreciative of that and appreciative of the ability and the opportunity to learn how to work hard towards achievement.”

Recognized for her many contributions to the ArtCenter community with the Outstanding Service Award, Professor Gloria Kondrup said in her remarks, “I’m much richer for having the opportunity to work with and teach incredible students, and to work with such dedicated faculty and staff.” She continued to thank College leadership and the patrons, including Lowell Milken, who have supported her in establishing the Hoffmitz Milken Center for Typography (HMCT) at ArtCenter, where she has served as the executive director for the past five years since its founding.

“For me, ArtCenter was a real beacon,” said artist Sterling Ruby as he received the newly-established Distinguished Mid-Career Award. “The graduate program for me was so beyond distinguished that it really was the only option. There’s not a month that goes by that I don’t think about the choice that I made and the choice that the faculty made of letting me into the program.” Ruby continued to thank the faculty in attendance, including T. Kelly Mason, Bruce Hainley and Diana Thater, as well as the late artist Mike Kelley who mentored him when he was a student at ArtCenter.

“Life is a series of chapters, and I think much of what makes life so vibrant is that we don’t know where we are going to go,” said Doug Aitken following his introduction as the recipient of the Lifetime Achievement Award. Reminiscing about one high school teacher who suggested he present his portfolio to ArtCenter, Aitken related the story of his admission to the College under the guidance of the late Phil Hays. “We’re all in this together,” Aitken said in appreciation. “Let’s create. Let’s make our voices heard.”

As he concluded his remarks, Aitken shared a story about when, as a new student, he had the opportunity to work with artist and activist Keith Haring who was invited to paint a mural at ArtCenter’s Hillside Campus to serve as a permanent memorial to members of the art community who died of AIDS. In appreciation for his assistance, Haring gave Aitken his supply of enamel paints. Aitken ceremoniously presented to Buchman a can of that paint recently discovered in his mother’s garage, which the College now intends to display alongside the mural.

President Buchman concluded the awards ceremony, thanking the awardees and highlighting the College’s overall mission of increasing accessibility for art education, “Tonight, we also reaffirm our commitment to making an ArtCenter education more affordable; to provide opportunities for future artists and designers—regardless of circumstance—to pursue an art and design education; so that they in turn can fulfill our mission: Learn to create. Influence change.”

Following the ceremony, guests strolled next door to Otium for a reception and seated dinner in honor of the awardees.