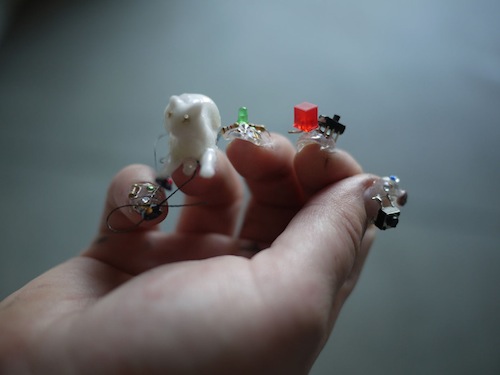 Handiwork courtesy of the team behind the Sensor Salon

Fresh from wowing a tough techie crowd at Microsoft headquarters in Seattle, Media Design Practices grad students Kristina Ortega and Jennifer Rodenhouse give us the lowdown on their novel nail salon concept that turns fingernails into a dynamic digital platform. The duo first hatched the idea for a “Sensor Salon” in a Wearable Ecologies class sponsored by Intel and led by MDP faculty members Philip van Allen and Ben Hooker. Now it’s taken flight, attracting interest in the field as well as a flurry of media attention, from public radio to Fast Company and Geekwire among other outlets. Their Wearable Services—proffering technologies embedded in nail gels, from LCD screens and 3D printed objects to GPS and haptic feedback devices—may well be fashioning the future.

The Dotted Line: What was your main inspiration for this unusual type of wearable device?

Kristina Ortega: We were really inspired by nail art culture and nail art salons in Los Angeles. During our initial research into the current state of wearable tech we noticed that many devices were one size fits all. This seemed in such stark contrast to this process of self-maintenance we saw with nail art and salon culture, which is all about the process of personalization. 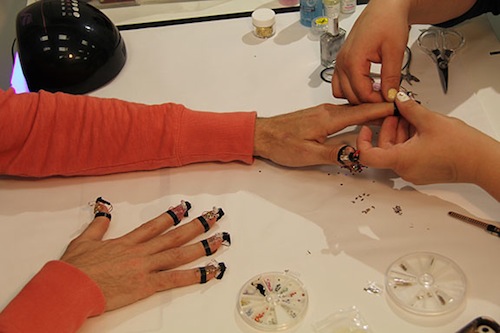 Sensors are affixed to nail gels during this high-tech manicure

TDL: You were on a short list of student design teams from around the world invited to Microsoft Research’s Design Expo. According to Geekwire, Microsoft Research’s Bill Buxton called your project “one of the best examples he has seen that ‘designers think differently than computer scientists.’” What was it like to go from classroom experimentation to a full-on presentation before researchers at Microsoft?

Jennifer Rodenhouse: It was really a challenge of communication. We had to figure out how to tell our project’s story in a compelling way. The presentation did not necessarily follow our exact process of experimentation but rather made our research more clear, highlighting the key aspects with a sense of story arc. It was difficult to step back and be critical, and be willing to leave certain parts of the project out.

TDL: How has the MDP program–your faculty and fellow students–helped you achieve this success?

JR: MDP has really shaped how we think and design, using a process of criticality and making to pose new questions rather than solutions. Everyone in Media Design Practices has been incredibly helpful and supportive! From the guidance of our professors Phil Van Allen and Ben Hooker to our fellow students who helped at the first Sensor Salon opening.

KO: We are really interested in continuing our research and investigations into the services and infrastructure of wearable electronics. We wonder what a Sensor Salon might mean to different clients, networks of people, and in different locations.