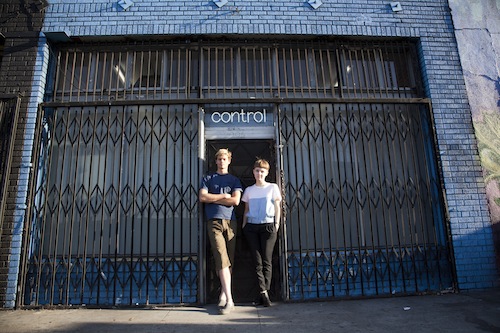 A mutual interest in installation art brought photographer Evelena Ruether and painter William Kaminski together as friends and sometime collaborators in Art Center’s Fine Art program. After graduating in 2009, and sharing a desire to maintain the strong community of fellow artists they had bonded with at Art Center, the pair co-founded Control Room, an independent artist-run space that facilitated artist projects and group exhibitions in industrial downtown Los Angeles. Ruether and Kaminski went on to graduate school while pursuing their own work and curating Control Room shows. The space was active for four years, attracting mid-career artists and ushering in a nascent arts district in the area.

The Dotted Line: How did you each come to Art Center?

Evelena Ruether: I was in high school taking photography classes when a representative from Art Center came to do a presentation, and from that moment I wanted to go there. I spent a number of years between high school and Art Center working on developing a photography portfolio with the end goal of one day applying. When I got there, I started in the Photo program. After about a year, I transferred to Fine Art. I figured out that commercial photography wasn’t what I was interested in. I wanted to have a more theoretical conversation.

As soon as I transferred, I identified more with my work. I received scholarships and good feedback and everything sort of started to click. I was doing sculpture and photography and then that became a kind of installation-based practice, where I was responding to space and context.

William Kaminski: I finished a BA in theater [at Occidental College], but painting was something I had done since high school and I was sort of living by doing commissioned portraiture. I felt technically proficient, but I needed a lot more knowledge. Somebody said go to art school, you’ll learn a lot. And Art Center was close by.

I was in Dave Bailey’s Systems and Structures class, where we were reading weird bits of theory and generally kind of analyzing the contemporary world, when I realized that if I really wanted to say what I felt about a situation, or the world, or my life, it wasn’t going to be expressed with paint. Once I was thinking bigger, the installations started flowing. It just seemed like, oh, I can do anything I want now. That was a really liberating feeling that Art Center is completely responsible for.

And it did connect with my theater background, because in essence theater is about creating worlds, creating an experience in a certain space. But I never would have thought of it as an art practice. 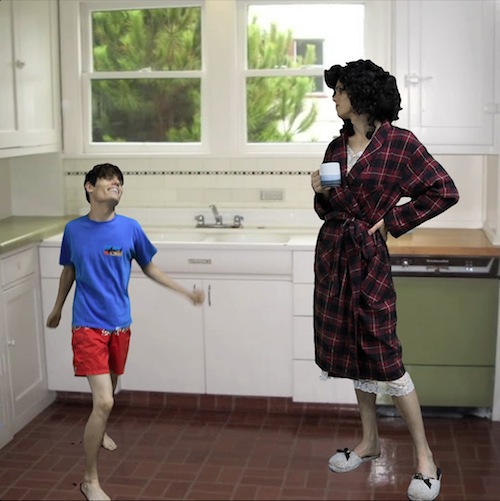 TDL: What other discoveries did you make at Art Center?

WK: Everything I was interested in, basically, was allowed in the room. Suddenly my definition of an artist was someone who is connecting ideas, and every part of life can be material. Art became a meeting ground for whatever I was living and breathing at that point. That’s a pretty radical change when you’re coming into a school and all you’re thinking about is paints and oil medium.

ER: I found that what was really important to me was being in conversation with artists about work. That led me to this place where I’m in between being an artist and being a curator and working to support other artists alongside producing my own work. That dialogue with other artists, and learning that you have to have a good knowledge of the context of your work and how it relates to other things that are happening in our moment–all of that conversation came out of Art Center.

TDL: You’ve both said that you started Control Room as a way to keep your community of fellow artists together after graduation.

WK: Eve had rented a big storefront space in downtown L.A. and was thinking about moving, but keeping a portion of this storefront as a studio. It just became the obvious decision that we would have a gallery space. We were familiar enough with what’s happening in contemporary art to know that what our fellow students were doing was quite good and even important. That was something we didn’t want to see slip away.

ER: I still feel my experience at Art Center is what built my identity as an artist, and those relationships with faculty and students are all important to me. William and a number of other Art Center students are still my core community that I work with and support and that was a lot of the reason we started the space.

TDL: Control Room was formed as a totally independent operation, not a commercial gallery, not a nonprofit?

ER: We think a lot about who has the ability and the resources to be in control of how and where and when artwork is presented, and what artists are supported and how that is done. We could have gone the route of trying to become a nonprofit and get grants, but we found that the way we were operating presented a specific kind of energy around the work, where the artists could feel they had authority and ownership.

WK: Neither of us signed up to be art dealers. We wanted to continue with our own art practices tenaciously while running the gallery. We saw nonprofit spaces around L.A. kind of floundering, trying raise funds and keep the board happy. They sort of lost their dynamism. It became a more exciting proposition for us, albeit it a short term proposition, to stay in the margins, allowing the space to grow in a very organic kind of way.

TDL: After you opened Control Room, the area around you began to change. It seems you launched an arts district.

WK: We were first, but it’s a place with a lot of space, and gentrification here is interesting because there aren’t populations that are being supplanted. It’s basically just vacant warehouses. So it’s really an obvious destination for the art world to move to. But, yeah, I’ll call us pioneers.

TDL: What are your individual art practices like today?

WK: My decision to fill the role of a curator and sort of create real space within a real community and observe how these forces move people around, [is] very related to my work, especially installation work. When I was at Art Center, I was interested in designing a world or a space or an experiment within a room. That suddenly wasn’t as satisfying as designing an experience in downtown L.A. in the East Washington arts corridor, or whatever they’re starting to call this area. I still do make studio work, but I think I’ll always have this urge to look at the big picture as much as possible.

ER: My work has always been a direct response to the space that it’s presented in [so] my practice has kind of ebbed and flowed. As we were running Control Room, my time and energy were going into that. A lot of the gestures and moves we were making are a step beyond how a normal gallery would be run, and that included more project-based ideas to be carried out by both William and me. Lately I’ve been working on music, too. I’ve been doing vocals and playing synths–it’s like an ambient noise kind of project. That’s taken a lot of my studio practice time. I really appreciate having a diverse set of goals.

TDL: What’s next for Control Room?

ER: We still have the space but are no longer able to operate ‘under-the-radar’ or legally hold events. William is focusing on studio projects and I have been managing and curating at Samuel Freeman Gallery in Culver City. Who knows what the future will bring!

WK: I think we’ll keep the conversation that we opened with Control Room going aggressively for the rest of our careers. We don’t want the things that we learned by doing Control Room to ever go away.

ER: That’s the most important part of it. Whatever the space becomes, however it evolves, it’s important to talk about who can present artwork and how that is controlled.

TDL: What advice would you give students regarding the Fine Art program?

ER: That sense of community you build is really important, because those are the artists that you’ll eventually show with, or be supported by, or work alongside for a long time to come.

WK: Just be open and let go of any preconceived notions of what art is. Really listen and let yourself respond as naturally as you can.