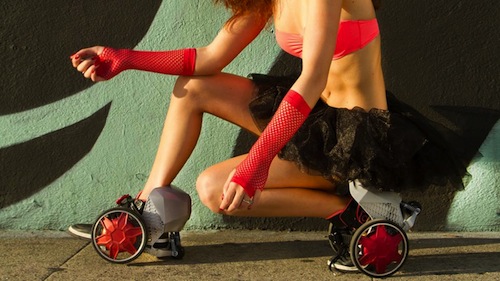 Once the province of comic books and children’s cartoons, rocket skates are no longer novelty props for Wile E Coyote and Batman. Acton, a California-based alternative-transport startup, has spun fictional straw into factual gold with its R RocketSkates, electric-powered footwear for city dwellers.

The brainchild of company founder and chief technical officer Peter Treadway, the RocketSkates take square aim at urban residents who too often find themselves at the intersection of too-close-to-drive and too-far-to-walk.

“In the late 1950s, people were predicting things like flying cars, jet packs and rocket skates,” Treadway says. “Well, one down and two to go.” (Actually, the flying car is a reality, courtesy of flights of fancy like the PAL-V One, Aeromobil and Terrafugia. But it’s hard to pick nits with the progenitor of something as novel as wearable transportation.)

The  rubber-wheeled super skates, which resemble Lego on wheels, or retro-geek mobility suitable for Maximus Prime and his ilk, are not short on technical specifications:

Each skate features by two 50w brushless motors, one inside each front wheel.
Rear-mounted lithium-ion battery packs, which fully charge in 1½ hours, power the motors.
The skates “talk” to each other via microprocessors, so they both maintain the same speed.
Top speed is estimated at 12mph, depending on various factors such as rider weight and wind speed.

Range and run times vary by model, of which there are three. The R6 can travel six miles and run for 45 minutes on a full charge; the R8 tops out at eight miles and 70 minutes; and the R10 maxes out at 10 miles and 90 minutes. The three models retail for $499, $599 and $699 respectively. As for hills, anything greater than a five- to eight-degree incline is a no-go. Click here for the BBC’s full article.