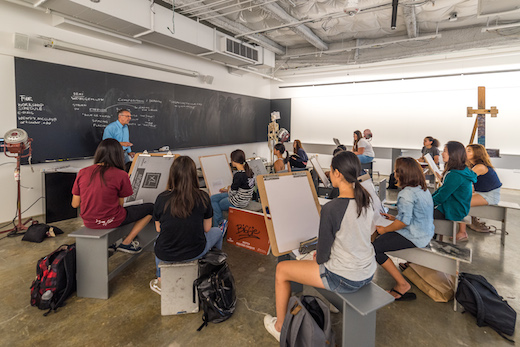 Take the 110 Freeway all the way to Pasadena and just try not to notice ArtCenter College of Design.

The College’s recently purchased six-story building at 1111 South Arroyo Parkway has undergone a makeover—its stucco exterior has been painted black and large “ArtCenter” logos adorn each side of its wraparound mirrored curtain wall—arguably giving the College its greatest public visibility in history.

But it’s what’s going on inside that structure that’s really impressive.

The beginning of the Fall term last week brought with it the arrival of hundreds of students to the building, all of whom are taking courses in the recently reimagined sixth floor of the building.

And what a reimagining it is. 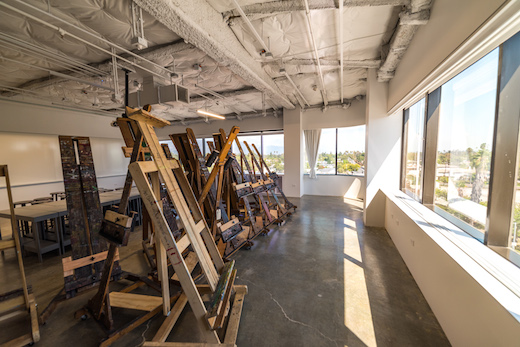 Step off the elevator and the atmosphere immediately sheds any vestiges of the building’s former life. Goodbye ’80s corporate office, hello 21st-century atelier.

“Think a bit of 1920s Paris reinterpreted for the present day,” says Ann Field, Chair of the Illustration Department, whose office resides on the floor. “It’s a thoroughly modern take on the drawing studio.”

The first thing you notice is the copious amount of white wall space. According to Field, these walls will be curated, giving lower-term students more opportunities to display their work than they had at the College’s Hillside Campus, Illustration’s former home before it relocated to both the 870 building and the 1111 building.

Also immediately visible upon exiting the elevator is a centrally located gallery that will be a showcase for specific topics and a means to highlight the breadth of work being created in the Illustration department.

“The possibilities for the gallery are endless,” says Field. “It could feature a one-week display devoted entirely to portraiture, act as a venue for a themed competition, or host a guest artist’s pop-up exhibition.” 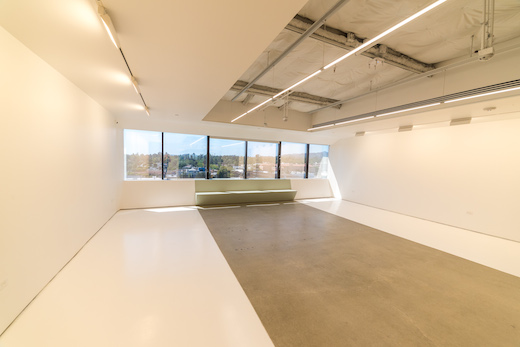 The possibilities for the new sixth floor gallery are endless. Photo: Chuck Spangler

The floor’s 11 new classrooms feature natural light, augmented by light sensors and light zones; high ceilings; storage cubbies; blackboards and moveable whiteboards; built-in video projectors and audio systems; individual exhaust ducts; space-efficient classrooms devoted specifically to painting or drawing and outfitted with drawing horses, easels or painting tables, depending on the needs of the course; and an ambience that evokes the feeling of working in a true studio devoted to the traditional arts of drawing and painting.

Much of the building’s extensive renovations would not have been possible without a groundswell of support from the ArtCenter community, including a $3 million donation from The Ahmanson Foundation, which funds cultural projects in the arts and humanities and education at all levels; a $1 million donation from Trustee Bruce Heavin (BFA 93), Illustration alumnus, and his wife, Lynda Weinman, co-founders of lynda.com; and a $425,000 donation from Trustee David C. Martin, Design Principal, AC Martin Partners, and his wife, Mary. 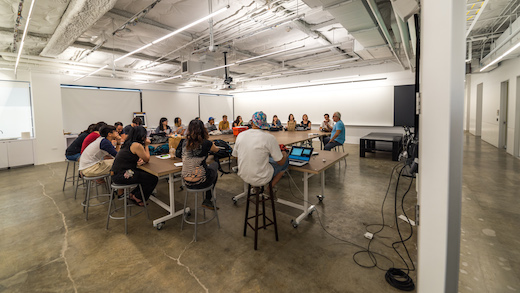 “If you look at the 870 Building and you look at this floor, there is something familiar, not quite the same, but uniquely familiar to the Ellwood Building at Hillside Campus,” says Rollin Homer, director of Real Estate and Campus Planning, who worked closely with Darin Johnstone Architecture on the renovation of both locations (870 and 1111), and knows every nook and cranny throughout the campus. “If Craig Ellwood Associates laid out the DNA for the College, these buildings would be its offspring two generations later.”

Homer’s department, headed by George Falardeau, senior vice president, Real Estate and Operations, is responsible for taking the College through the process of master planning with the City of Pasadena.

“We’re recognizing and respecting Craig Ellwood Associates’ intent for the interiors and asking ourselves how, with all the changes in technology over the past 43 years, do we need our interiors to work,” Homer continues. “Some of what we’ve done in 870 and 1111 will probably get infused into the Ellwood Building. It’s early on in the discussion, but we’re working on a plan that will tie them all together.” 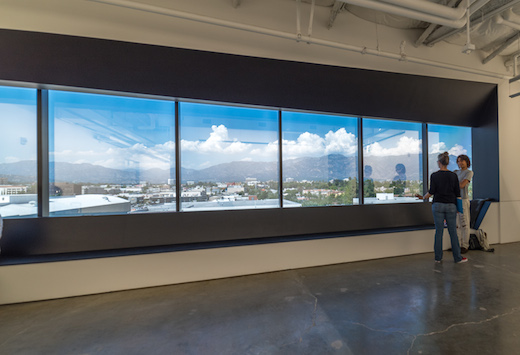 A workspace with a view. Photo: Chuck Spangler

And what do the students think?

During a break between classes, we caught up with a few students ordering meals at Foodies, the cafe on the ground level of 1111 which recently extended their service hours to accommodate the influx of students this term.

“I was surprised how large it is,” says Jeremy Kim, a fifth-term Illustration student, of the sixth floor. “The building is very quiet and it’s nice to be able to hear the teacher lecture.”

“I like how everything has a purpose,” adds Kim. “I think first term students are lucky that they get to jump in and start in this building from the beginning.”

“The view from the sixth floor is interesting because you can see how much more urban it is down here,” adds Falquez, comparing South Campus to Hillside Campus. “It feels a bit like an industrial zone, but it’s not, because we’re only a minute away from Old Pasadena.”

One thing Debbie Oak, a fourth-term Illustration student, wants to see in the future is for ArtCenter’s services to expand to South Campus.

“It would be nice not to have to go all the way to Hillside to turn in a paper or get materials,” says Oak, who is aware that the ArtCenter Student Store has a smaller pop-up shop in the 950 building, but wants to see even more amenities from Hillside being replicated at South Campus. “As long as more things become available for students down here, it will be a good place.”

“The windows are really big, so they let in a lot of light,” she adds. “I leave around 7 p.m., right when the sun is setting, which is really pretty.” 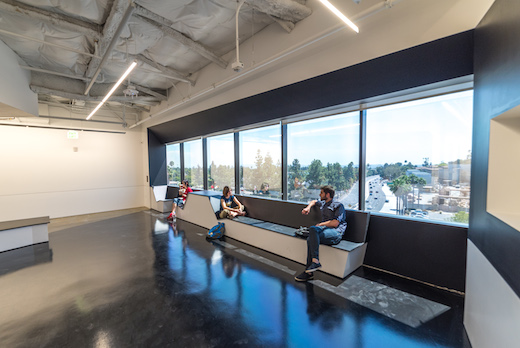 Last year ArtCenter purchased the 1111 Building, which runs contiguous with the College’s South Campus at South Raymond Avenue and East Glenarm Street. With the addition of 1111, South Campus now spans seven acres, further transforming it from a “satellite” location into a full-fledged second campus serving the needs of a growing student body.

The $27.4 million purchase of the building was made possible by the reallocation of a $15 million gift to ArtCenter—the largest donation in the College’s history—from philanthropists and classic car enthusiasts Peter and Merle Mullin. The couple’s generous donation was originally intended for construction of a new industrial and transportation design facility at South Campus. But when the cost-saving opportunity of acquiring 1111 presented itself—affording the College more space at half the price per square foot—it was agreed that those departments’ much-needed upgrades would be better built at the College’s Hillside Campus.

The result will be first-rate facilities at both campuses that mirror real-world settings and an educational experience that meets the expectations of industry today.

The remaining cost of the building will be funded by way of a state bond issue, with plans to repay the debt through a capital campaign. Student tuition dollars are not being used toward the building’s purchase.

In addition to classrooms, studio spaces, and administrative offices, upcoming features of the new building will include a street-level gallery open to the public, showcasing industrial and transportation design work by students and alumni, and loan exhibitions from automotive companies and car collections including that of the Mullins.

The expansion of the College’s facilities not only relieves overcrowding on the Hillside Campus but also, more importantly, allows ArtCenter to improve the overall experience for faculty, students and staff at both campuses. 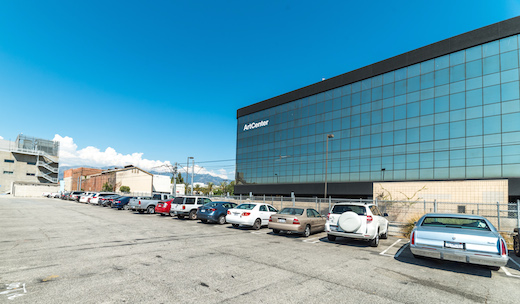 The 1111 Building stands at the corner of Glenarm and South Arroyo Parkway. Photo: Chuck Spangler

With additional reporting by Sylvia Sukop.