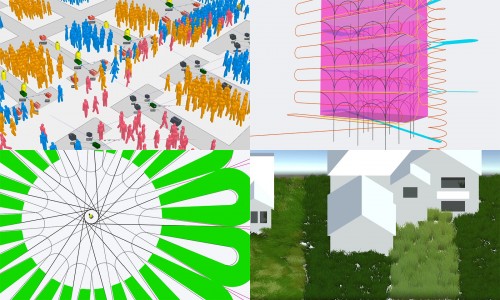 This Friday is ArtNight, a twice-a-year event in which Pasadena’s most prominent arts and cultural institutions—including ArtCenter College of Design—swing open their doors for a free evening of art, music and entertainment.

In addition to attending a celebration for the opening night of the College’s street art exhibition OUTSIDEIN, visitors to ArtCenter’s South Campus will have a unique opportunity to see in the Wind Tunnel Gallery a preview of Now, There: Scenes from the Post-Geographic City, an exhibition from ArtCenter’s Media Design Practices (MDP) program which will be installed at the Bi-City Biennale of Urbanism/Architecture this December in Shenzhen and Hong Kong.

Curated by MDP’s Professor Tim Durfee and faculty Mimi Zeiger, Now, There explores “what is now and where is there” in today’s reality in which “urban and digital realms are inextricably linked” by presenting a selection of screen-based works, objects and texts that “develop, explore and visualize a city not tied to any physical locality.” 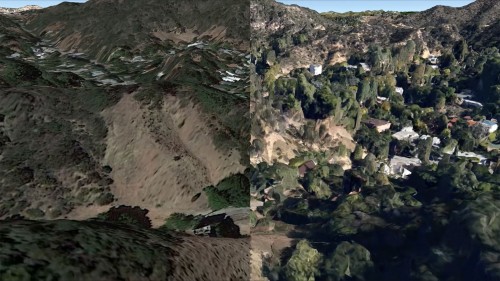 For the exhibition, the curators sought to explore this intangible, networked city with a perspective “neither dystopian nor boosterish.”

“We are not interested in sci-fi moralizing or video game nihilism,” write Durfee and Zeiger in Now, There’s introductory text. “Rather, we take an optimistic view of this emergent urban condition and material culture … with curiosity and humor in a way that designers and architects and filmmakers have been occasionally adept at in the past.”

Work on display includes Everything, On Time (2015) by Durfee, MDP Associate Professor Ben Hooker and recently hired Interaction Design faculty and MDP alumna Jenny Rodenhouse (MFA 15), described as “a testing ground for questions about what the city is, and perhaps will be” that investigates how communities might change when real-time virtual navigation of cities becomes possible, and raises questions like, “If the algorithm is the hallmark of our upcoming era, how will it be manifest architecturally, socially, culturally?” 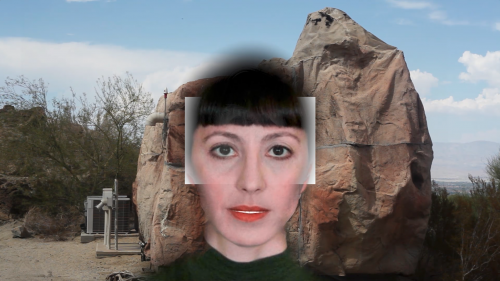 Still from Natural Wi-Fi (2015) by m-a-u-s-e-r, which explores how Nature has become the Internet’s aesthetic obsession. Image courtesy m-a-u-s-e-r

The exhibition also includes m-a-u-s-e-r’s Natural Wi-Fi (2015), a project the Stuttgart- and Istanbul-based art, design and architecture duo developed and created during their design residency at MDP over this past summer, which explores both the material byproducts of the Internet as well as how Nature has become the online world’s aesthetic obsession, and unwraps the multiple layers of meaning behind cellular towers disguised as palm trees and artificial stones that hide outdoor sockets.

Also on display is MDP alumnus Walton Chiu‘s (MFA 14) Estimated Time of Arrival [ETA] (2014), which “examines the human desire to be located within the social matrix in an age when ubiquitous and persistent sensing … produce momentary collapses of epistemic hierarchy;” Metahaven‘s City Rising (2014), an homage to Constant Nieuwenhuys, architect of New Babylon, which explores the “global spread of affective, precarious labor, captured in the notion of love;” and John Szot‘s Architecture and the Unspeakable (2014), the “story of three buildings exhibiting an unconventional approach to architectural design” which “demonstrate how architecture might embrace the full range of human experience.” 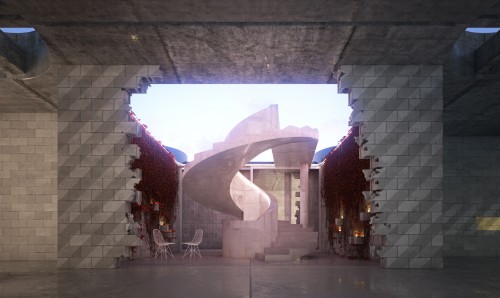 The brochure for the exhibition, designed by MDP faculty Jennifer Rider, also includes essays by Thérèse F. Tierney, director of URL: Urban Research Lab at the School of Architecture, University of Illinois Urbana Champaign; Enrique Ramirez, an instructor in the College of Architecture and Planning at Ball State University; and Joanne McNeil, a contributing writer/editor for The Message and a 2015 fellow at the Carl & Marilynn Thoma Art Foundation, recipient of the Arts Writing Fellowship Award.

Now, There: Scenes from the Post-Geographic City runs through October 29 in the Wind Tunnel Gallery at ArtCenter’s South Campus and is shown by appointment only. The exhibition is open to the public this Thursday, October 8, 8–10 p.m.;  Friday, October 9, 6–10 p.m. as part of Pasadena’s ArtNight; and on Thursday, October 29,  5–9 p.m. for its closing reception.