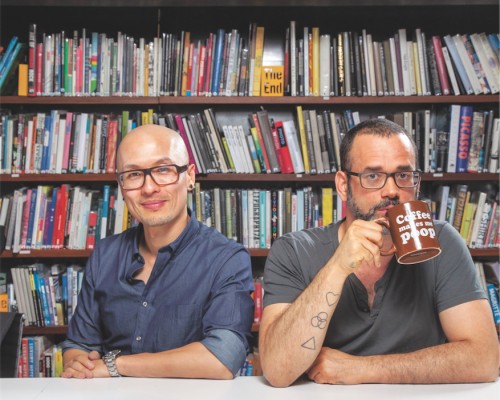 Chris Do and Jose Caballer, co-founders of The Skool. ArtCenter photo by Jennie Warren

Inspired and mentored by these pioneers, Graphic Design alums Jose Caballer (BFA 96) and Chris Do (BFA 95) represent a new generation of innovative education entrepreneurs. Together the two have co-founded The Skool, an online learning resource for designers.

Alongside Blind, the successful Santa Monica design studio he heads, Do has taught graphic design at ArtCenter for the past decade. Around 2010, he began to think about how he might give online clients something of the education his students were receiving at ArtCenter.

Completely independently, Caballer had also become interested in teaching designers: “I thought, instead of charging half a million dollars to build somebody’s website or product, why not teach half a million people how to do it?” With that thought in mind, Caballer called his mentor from ArtCenter—Lynda Weinman. She urged Caballer to explore his concept further, saying, “Jose, if anybody can do it, I know you can.”

Caballer began by recording This Week in Web Design, a weekly video distributed free on YouTube. Later he reconnected with Do, and the two began producing videos together, ultimately founding The Skool. Like Weinman and Heavin in the early days of their business, Caballer and Do currently provide a variety of services, from workshops to corporate training to two online educational kits—“Agency in a Box” and “Core Strategy”—which aim, in Do’s words, to offer “a kind of graduate business studies program for designers.”

Caballer’s own education has been a transformative journey. “ArtCenter made me who I am today. I was just some Puerto Rican kid who liked to draw, and I went to one of the best design schools in the world and had opportunities that I never would have had.” Now he offers others the chance to learn. “We have creative people of all sorts, and suddenly, by us teaching them business tools that they can use to manifest their ideas, they have more power.”