On today’s episode of Art Center Stories, Art Center Transportation Design alumnus and famed designer Richard Holbrook remembers the impact the students and faculty had on him both at Art Center and after graduation. 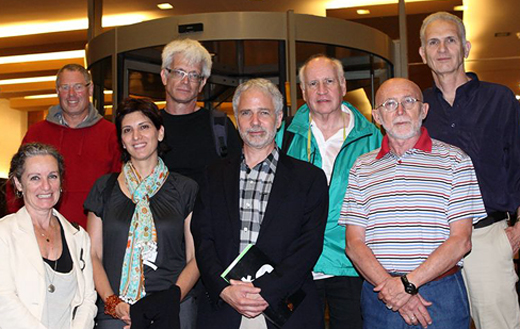 When I learned that Art Center President Lorne Buchman was coming to Haifa, Israel, I was excited. It’s a great and rare opportunity to arrange a meeting with Israel-based Art Center alumni—many of whom I was not even acquainted with. I only knew of one or two fellow alums here, and set out to find more our tiny country.

A 1976 Advertising graduate myself, I contacted Leon Botner PHOT ’74, who I first met when I was majoring in Advertising at Art Center’s Third Street campus (I graduated two years later at Hillside Campus). Back then, in the mid- ’70s, there were two other Israeli students at Art Center, but as far as I know they settled in the U.S. after graduation. Leon helped me to locate two of his photography colleagues: Dan Porges PHOT ’72 and Micha Shelef PHOT ’69. I contacted an alumna I hadn’t met: Avital “Tally” Kelner-Gazit, GRPH ’85, and she directed me to two more alums: Avidor “Dori” Regev TRANS ’87 and Cecilia Vitas, ENVL’98.

So now there were seven of us, and we were excited to meet Art Center’s president and each other.

We met at the Dan Carmel Hotel, located atop Mt. Carmel overlooking the beautiful port of Haifa. After getting acquainted, we decided to go to a restaurant in town for our informal meeting. While walking to our destination, we found that we were speaking with each other and Lorne like old friends—the immediate connection and camaraderie we felt was amazing! It felt so much like our past at Art Center—while much time has passed and things are much different in our lives today, Art Center was connecting us, and naturally we shared memories and mutual experiences.

END_OF_DOCUMENT_TOKEN_TO_BE_REPLACED

Don’t miss this exclusive screening of the new film produced by lynda.com on Art Center alum, designer, illustrator and writer Stefan Bucher. It will be screened Thursday at the Ahmanson, and is free and open to the public. RSVP to alumni@artcenter.edu by July 25.

Looks like a great film—take a look at the preview below. 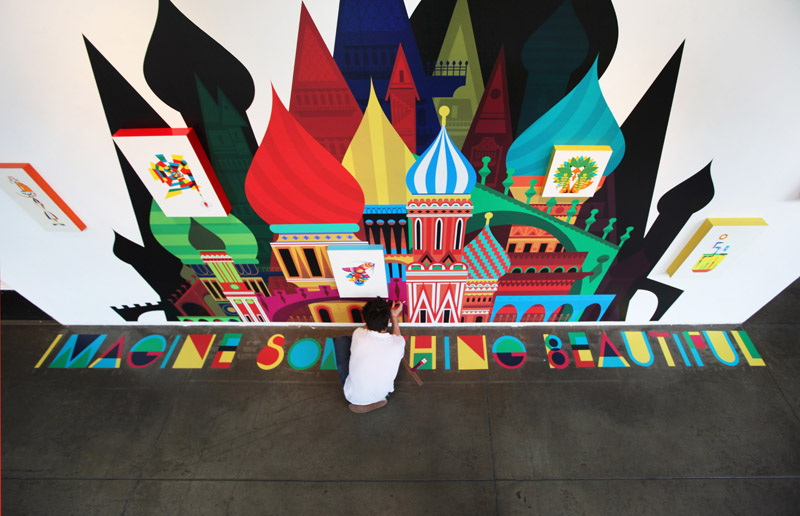 Last year we told you about the amazing collaboration between Venice-based Blik and Art Center Illustration alumnus Patrick Hruby.

We’re excited to announce that Blik has just launched a new wall graphic designed by Hruby. The graphic, Imaginary Castle, is the same design that Hruby created for his final project at Art Center, on display in the Student Gallery last year. 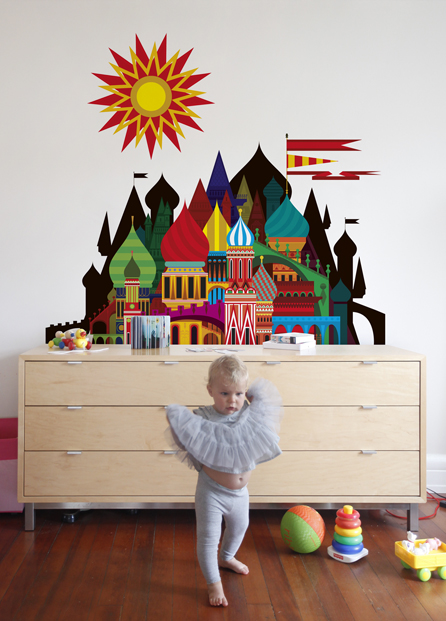 Hruby first paired up with Blik in 2010 when he was a graduating student and Art Center’s Spring 2010 valedictorian. Earlier in the year, Blik had mentored Hruby’s fellow Art Center peers in the Advanced Illustration Studio class.   This serendipitous connection led Hruby to turn to Blik to manufacture his final project, Imagine Something Beautiful.

Each year, the Art Center gives the wall in the main school entranceway to one star student to display their final project during Graduation Show. Hruby’s project was selected for the space in spring 2010, and he approached Blik to help execute his vision and overcome the challenge of placing the design on the school’s grad wall. The transformation of Hruby’s illustration into a wall graphic was easy as Imaginary Castle was always conceived as a wall decal.

“I wanted to create a magical place that was large enough to make you feel as if you were there,” Hruby says. “Imaginary Castle pays respects to my Eastern European heritage and grandparents. I’ve always been fascinated with that design aesthetic and wanted to try my hand at it.”

The punchy colors add dimension to the large-scale design, making the decal “pop-off” the wall and appeal to children’s vivid imaginations and fairy tale sensibilities. 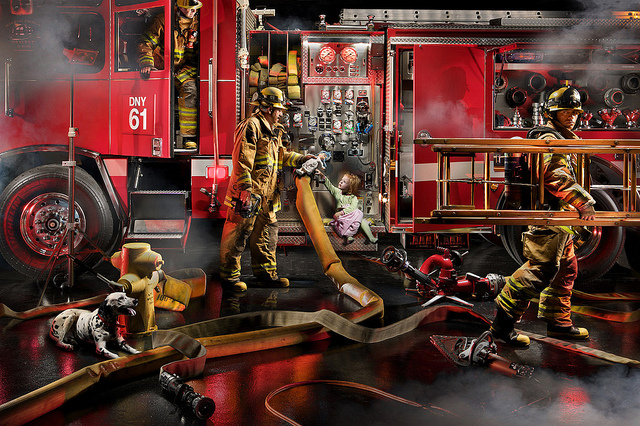 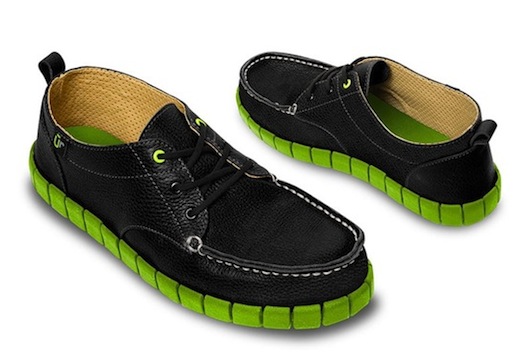 Never heard of Urshuz? You will soon enough.

Perhaps you’ve read about Art Center Product Design alumnus and faculty member Grant Delgatty’s entry, the Soleman Redemption, into last month’s Red Bull Soapbox Race in downtown L.A. The vehicle Delgatty drove—which could shed its layers to transform from a shoe, to a sandal, to a sole—was essentially a moving advertisement for his new line of footwear, Urshuz, whose main hook is that consumers can mix and match shoe uppers and soles into a variety of material and color combinations.

Urshuz (pronounced “yer shoes”) are currently available for purchase at the Museum of Contemporary Art Chicago, DNA Footwear in Brooklyn, ShoeLab in Quebec and a number of other retail locations. And next month, Delgatty’s line hits the big time when the customizable shoes will be available at Urban Outfitters stores nationwide.

We sat down with Delgatty—whose history in the footwear industry includes stints designing for K-Swiss, heading up design at DVS Shoes and holding the position of Vans’ director of design for seven years—to get to the very sole of Urshuz.

Dotted Line: How did Urshuz come about?
Grant Delgatty: I’ve been in the footwear industry for a long time, and one of the growing trends I’ve observed is that consumers want to express themselves and they want to feel connected to their products. I set out to develop a method in which a consumer could become more involved in the design process of their footwear.

END_OF_DOCUMENT_TOKEN_TO_BE_REPLACED 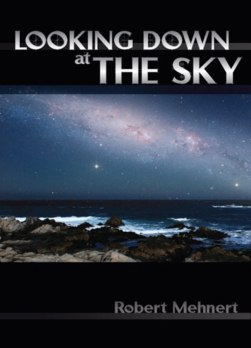 Jinn is based on the Middle/Far East myth of the Jinn, a race of beings that occupied the earth long before mankind evolved. The problem is that some of them want the world back for themselves. The story follows Shawn, the one man who can save humankind, on his quest to save mankind from a terrible fate.

The planned release date is this Halloween. Mehnert and Ahmad have worked together on three other films.

In a departure from the world of motion pictures, Mehnert has written a series of books, the first of which, Looking Down at the Sky, is now available on Kindle from Amazon and barnesandnoble.com. An adventure in time and alternate reality, the story tells the story of a brilliant mathematician lost in a mysterious earthquake—only to wake in her own bed, discovering that seven years have passed.

In today’s installment of Art Center Stories, Art Center Advertising alumnus Keith Longino talks about getting work after his graduation in 1967, and how the skills he learned here helped him make a radical career change years later. 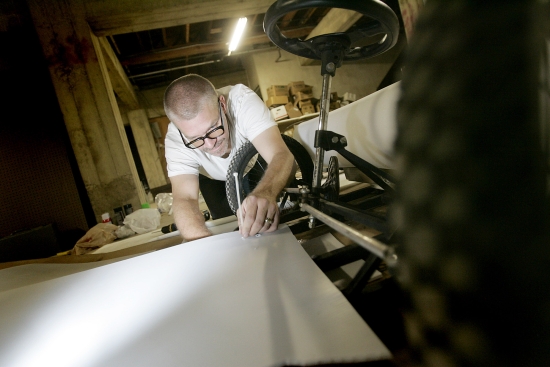 From the Pasadena Star-News:

Utilizing fasteners, buyers can attach and swap different styles of tops to Urshuz soles, or convert them into sandals. That’s pretty much how Soleman Redemption, Delgatty’s entry in the 10th annual event race, will work.

While he’s hurtling at 35-40 mph down South Grand Avenue, Delgatty will rip away Soleman Redemption’s foam top resembling a giant shoe to reveal a giant sandal underneath.

“Then at some point in the course, I’ll rip off the sandal, so it’ll just be the sole,” said Delgatty, who teaches product design at Pasadena’s Art Center College of Design.

We’ll be bringing you more on Delgatty’s Urshuz next month, so stay tuned.

Be sure to read the rest of this great article, and check out the slideshow: Pasadena team will compete in this weekend’s Red Bull Soapbox Race