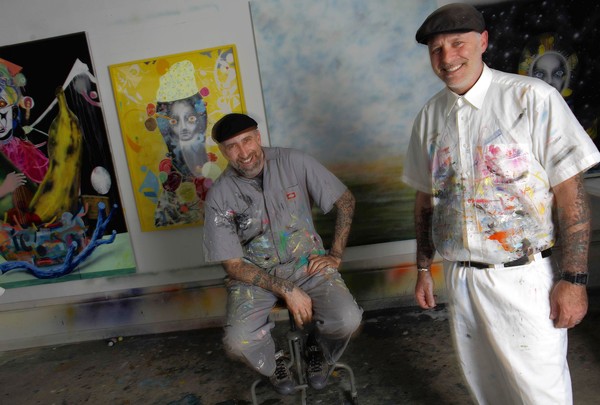 Sunday was the Art & Design Open Market, a free event allowing the public a rare opportunity to purchase prints, photography, sculpture and fine art created by Art Center students, faculty and alumni. About 25 from the Art Center community participated—check out the images below provided by the CSE: 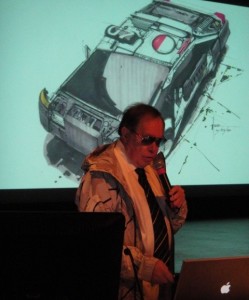 His lecture traversed the history of automobile design, the future of transportation, his early work for Ford and U.S. Steel, his work on Blade Runner and his latest book Sentury II.

We followed up with the designer via email to ask him about Sentury II.

Dotted Line: You mentioned in your lecture that the cover of Sentury II is intended to look like a metallic artifact that might be found in the future. What’s happening in the scene depicted in the artifact?
Mead: On the left of the spine of the book is a series of manifolds, circuitry and panels that simulate the energy feed to the image coherent side at the right (the actual cover of the book). I show a stylized, ceremonial figure just to the right of the book spine (the center of the overall artwork) and a horizontal split that reveals an energy source (heat? photon glow?) from behind the front surface of the plate combination.

At far right, just above the glowing energy source horizontal is a tableaux of figures and fixtures. One figure is entering a vehicle of some sort while behind him are a series of figures depicting a montage of social interaction, stylized foliage and geometric alignments that eventually go parallel to the outer edge of the ‘artifact.’

I imagined that this entire piece might have been dug up, cleaned off and somehow energized to bring the overall surface detail into view. The overall look of the cover art is a deliberate homage to the cover of Sentury II, which I painted first. 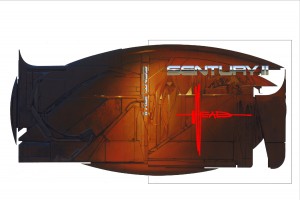 The cover of Sentury II

END_OF_DOCUMENT_TOKEN_TO_BE_REPLACED

This Sunday is the Art & Design Open Market at One Colorado. 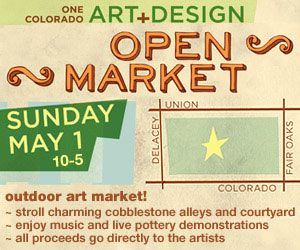 Open Market is free and open to the public. It allows a rare opportunity to purchase prints, photography, sculpture and fine art created by students, faculty and alumni form Art Center and PCC. All of the proceeds from sales will go to the artists.

Since its launch in 2003, the Open Market has provided visibility for more than 700 artists and has served as a destination for thousands of art collectors and enthusiasts. Art for sale includes photography, fine art, paintings, illustrations, graphic design, ceramics, sculptures and more. For photos of the Fall 2010 Open Market, click here. 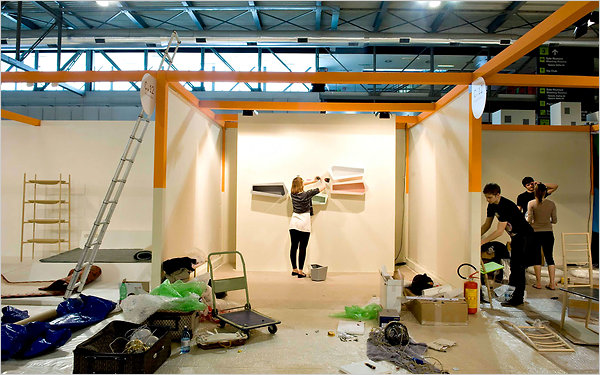 Brooke Woosley at work in her booth at the Salone Satellite

The New York Times has a great article on last week’s International Furniture Fair in Milan, where several Art Center students and alumni were exhibiting their work.

For up-and-coming designers, “Milan is something else: a gateway to an international reputation, the place where a prototype might be snapped up for production, or a chat at Bar Basso (the watering hole that is to ambitious designers what Les Deux Magots was to expatriate writers in Paris) might lead to a job in a renowned studio. Mixing with the throngs of manufacturers, distributors and buyers are legions of young designers who aspire to global recognition and the important money that goes with it.”

The article highlights alumna Brooke Woosley, who was at the fair exhibiting two designs: Chloros, a faceted display case and Bundle, a dangling lamp.

By noon on the fair’s opening day, Ms. Woosley had already begun to regret her brown leather boots with their cruel wooden soles. In 2007, she had helped design the booth at the Satellite occupied by her classmates at Art Center College of Design in Pasadena, Calif. This was her second trip to the fair. Had she forgotten that sensible shoes, even in this capital of style, aren’t a fashion crime, but preventative therapy? And speaking of discomfort, what was she planning to do if someone ordered, say, 100 Chloros?

View student designs on display at the fair, and check out additional coverage on the fair and Art Center students exhibiting designs there: 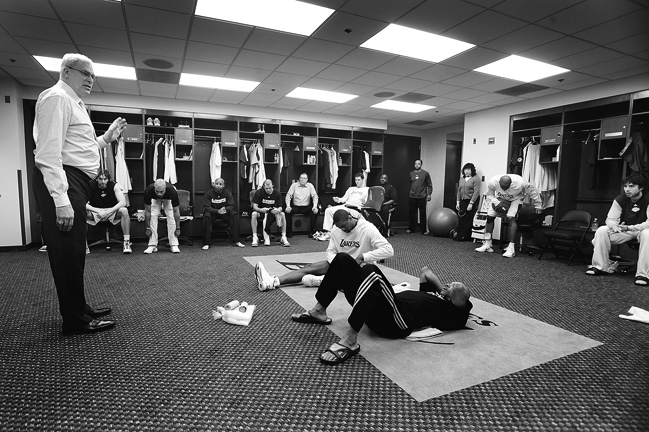 Photo by Andrew D. Bernstein, from Journey to the Ring

Like many of the professional athletes he captures on film, Photography and Imaging alumnus Andrew Bernstein is recognized as an all-star in his respective field. As NBA Senior Official Photographer and NBA Photos Senior Director, Bernstein’s photography has appeared on thousands of magazine covers around the world.

What’s different about Bernstein’s work is the unique personal rapport that he’s developed with the athletes he shoots, allowing him exclusive access to behind-the-scenes moments. His work has been exhibited in solo shows around the country, including a 20-year retrospective of his work in 2004. Bernstein is among just four photographers whose work was selected for permanent exhibit in the Naismith Memorial Basketball Hall of Fame. He was also instrumental in the development and use of the multiple-camera Flash Wizard II system, which revolutionized indoor sports action photography. His most recent book, Journey To The Ring: Behind the Scenes With The 2010 NBA Champion Lakers, written by Lakers coach Phil Jackson, chronicles the team’s season leading up to the championship.

Just in time for the NBA playoffs, we caught up with Bernstein to talk to him about basketball, photography and everything in between. 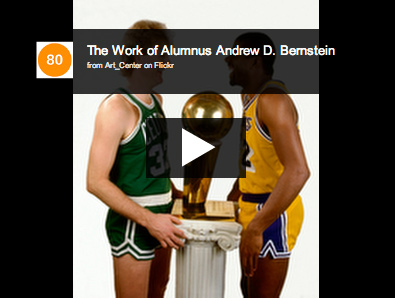 Dotted Line: Tell us about what you do.
Bernstein: I am the team photographer for the NBA’s two local teams, the Lakers and Clippers. I travel with the teams and cover all the major NBA events—Olympic Games, USA Basketball, WNBA, All-Star Games, Finals. As a senior director, I oversee various team photographers, mostly in the Western Conference. With my boss, the VP of NBA photos, we manage photography throughout the league.

I started working as a freelance photographer for the NBA in 1983. That year’s NBA All-Star Game was my first assignment. I continued freelancing for them and in 1986, helped create the position of official NBA photographer. It was a contract position, and I continued that in that manner until I became an employee of the NBA.

I’ve worked as the team photographer for basically every team and every venue in L.A. since then. I was the Dodgers team photographer from ’84 to ’95. And I’ve become the director of photography for AEG’s two main facilities, the Nokia Theater and Staples Center. I have a crew of five or six people, depending on what’s going on that time of year. We’re responsible for photographing every event in these venues, sporting or otherwise. In addition, I’ve been fortunate to run a successful business, Andrew D. Bernstein and Associates Photography, Inc.

Dotted Line: Which sport do you enjoy photographing the most? Is there one that’s more difficult to capture?
Bernstein: I’ve shot every sport known to man. Baseball was very tedious and challenging because of the boredom factor— sometimes you can go an entire game without really getting a great picture.

When you shoot a hockey or football or a basketball game, though, something’s always happening. It makes it fun to shoot. I love shooting football—I shot UCLA football for five years, and shot the Raiders and Rams when they were in L.A. Hockey is probably the hardest to photograph, because we’re physically limited to where we’re allowed to position ourselves and shoot—we have to shoot through a little hole cut in the boards beside the rink. Not to mention, it’s very fast moving, with players coming toward and away from you at a fast speed. It can get crazy.

END_OF_DOCUMENT_TOKEN_TO_BE_REPLACED 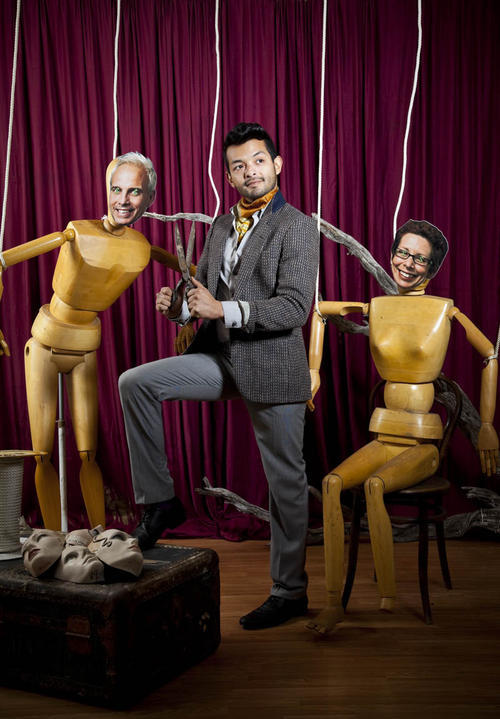 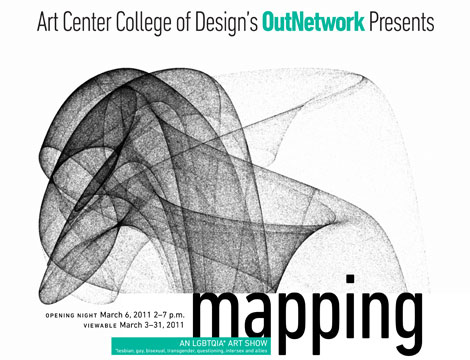 Mapping is an extension of the mission of OutNetwork, which not only supports and embraces a variety of individuals from every socio-economic background, but also provides opportunities for networking and advancement for its members.

An opening reception will be this Sunday, March 6, from 2 to 7 p.m. at the Brewery. Refreshments and hors d’oeuvres will be served.

Art Center students exhibiting in the show include:

The exhibition will be on display through March 31 at L.A. Artcore Brewery Annex. Regular gallery hours are Wednesday through Sunday from noon to 5 p.m. 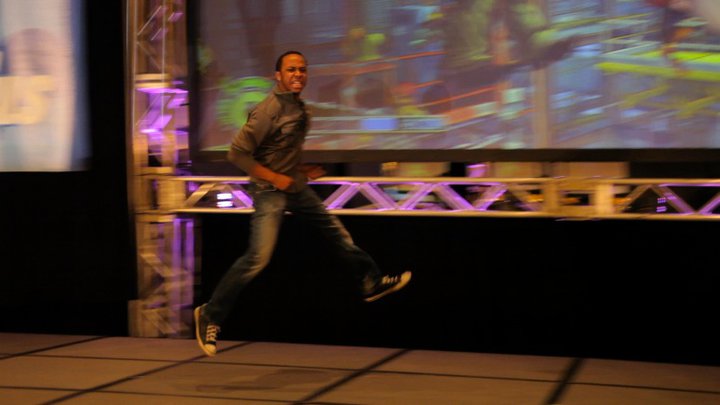 For Focus, Hwang followed Ross throughout 2010 as he travelled the country, competing in Street Fighter 4 contests and preparing for the big tournament.

The film premieres tomorrow evening at Hillside Campus. Admission is free, and you can RSVP here. Check out the trailer below. 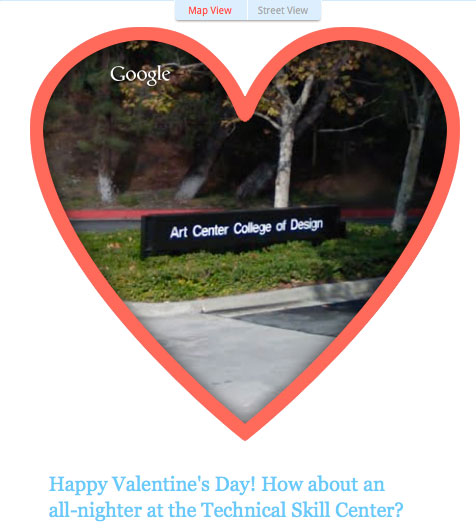 We’ve told you about the Google 5—and we have an update on what our Graduate Media Design alums have been up to over at Google Labs.

Today, Chris Lauritzen and team launched “Map Your Valentine,” which lets you use Google Maps to share a special place with a special someone. It’s been very well received—and it’s not too late to send your special someone one of these customized valentines.

Check them out—and we’ll keep you updated on what the team is up to.